StofSkop is in its FOURTH year. Yeah – we’ve been digging dust for FOUR years already and it just keeps on getting better.

The StofSkop event is a social flat track race held once a year at the Randfontein Oval Raceway. It is the one day a year that you can test your left-sliding abilities on a track, while dicing another oke that’s in a hurry to deliver a pizza. You can literally ride anything, but preferably an old skedonk.

You can suit-up, put on a swimsuit, sweatsuit, spacesuit, anything in pursuit, probably not something that will end in a lawsuit, yet whatever is unsuitable will be perfectly suited.

The event started with all the competitors divided into classes that (sort-of) made sense. These are the classes:

The pizza delivery bikes fall into any class, except if they’ve got Hawaiian… people have got a thing against pineapples?!?

As the event progressed, you could join the class with the most dust; or the least smoke; or whomever was up next.

Have any of you ever watch the bio, slash comedy, slash drama, slash sports documentary called GLOW (Gorgeous Ladies Of Wrestling)? It’s about how ladies wrestling started in the 80’s.

You know when you watch something and think to yourself, “I can do that!”

But then you can’t…

Yet you still try…

And you believe you look good doing it…

So we started SLOW – Skinny’s Ladies Of Wrestling

We watched a few YouTube videos, followed the GLOW series, wrote down folios filled with notes and pulled out an old sponge mattress. For weeks we were practicing our moves. We got blue marks, purple marks, skid marks. I think I broke my bum. We had swollen joints, an eye nearly poked out, pants torn, and our neighbours in constant fear of all the screaming and shouting.

Skinny and Chikita both wanted to race at StofSkop, but we only had one bike!

The morning started with glitter, liquid eyeliner, blue eye shadow, six more layers of glitter, leotards, hair teasing and legwarmers. Back in 1984, it would be considered a normal Tuesday morning. In the background we had SABC Body Beat reruns, and the radio was cracking Bonnie Tyler… “Holding out for a heeeero!!!”

This year the event was held at the Randfontein Oval Raceway. It was a long drive to the track but at least we got time to prep our one lines and insults in the car.

The track was packed with more people than a SA protest march. The bikes on display were unbelievable. Some really old donkeys, incredibly beautiful customs, and even a lawnmower mounted on two wheels. The sky had a teal blue coloured cloud hanging over the rrrrringdddingddding-singing engines.

We did our own quick scrutineering of Dapple (the Suzuki BX120 SuperStar).

“I don’t know??? Shouldn’t there be a hole-thingy for the exhaust?”

The show started with a Speedway Showcase of the realdeal motorcycles, and two reallerdealler racers. Everybody stood in awe watching these professional trackers as they slid around the track in ease. I heard a few spectators mumbling, “I can do that…!”

It was time to see if they could…

Donovan Fourie opened the track with a few words of wisdom, “Trust the dust!​”

Skinny and Chikita first had to battle it out for the first ride. We started with a glaring contest, which turned into a slam-down-on-the-floor contest really-really quickly…

*Pst… I’m gonna try and channel Jim Ross – a WWE commentator – through the wrestling scenes. These are some of his real comments – DO NOT BE OFFENDED!*

Business is about to pick up here! Oh no! That look of disbelief on the face of Skinny has turned into a look of rage! Wait a minute! Look out! Look at the carnage! What the hell is that?!? What the hell is this?!? I don’t believe it! I don’t either! This is great! 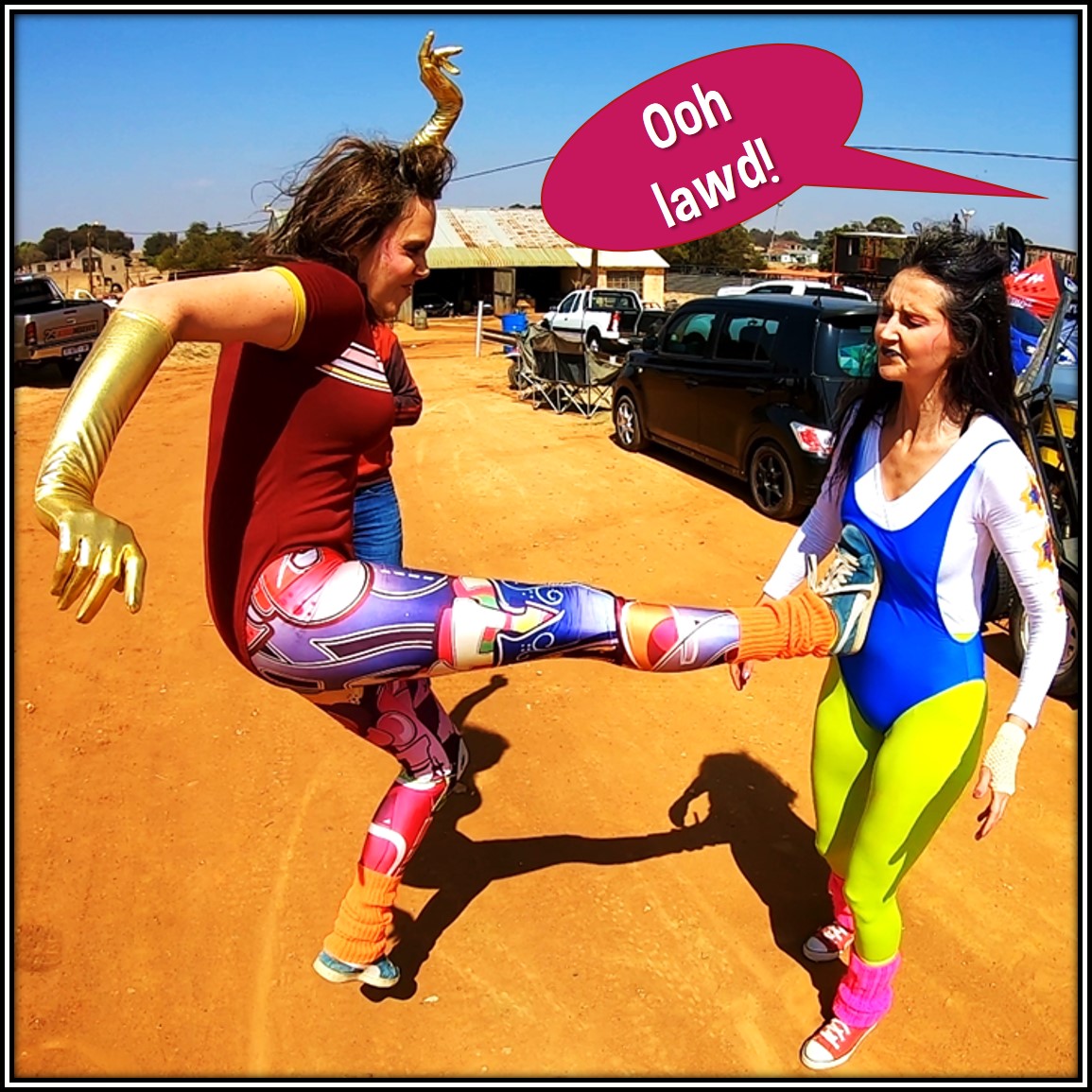 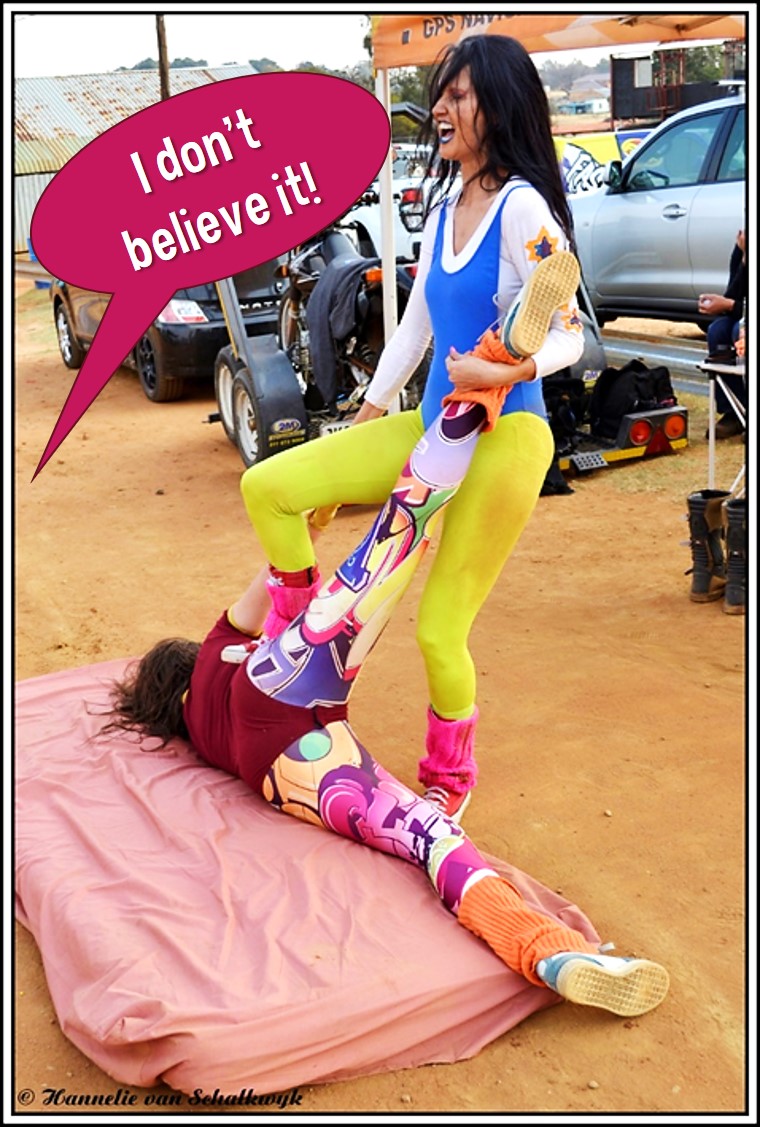 This is awesome! It is electrifying, it is… Oh there’s the stomp! Gahh! No! What is wrong with you?!? Saturday night STOFdown, it’s happening! No, no, look out! Look out! She's not just trying to hurt the woman - she's out to end her career!

It was the first race of the day, and Skinny took the honors of getting Dapple warmed-up and spitting flames.

Skinny shot out like a bullet (…that was being thrown by a four year old).

The track was bumper-to-bumper and choosing a line was impossible.

Sometimes she had to resort to her WWE skills on the track to remove the guys OFF her line.

The final flag went up too soon, but she still managed NOT to get lapped. It was a good one!

That’s pathetic! That’s not funny! She’s being whipped like a government mule! Get up girl! What the hell?!? What are you an idiot?!? You wish you had legs like that! Err, sometimes I do! What?!? What the…?!? 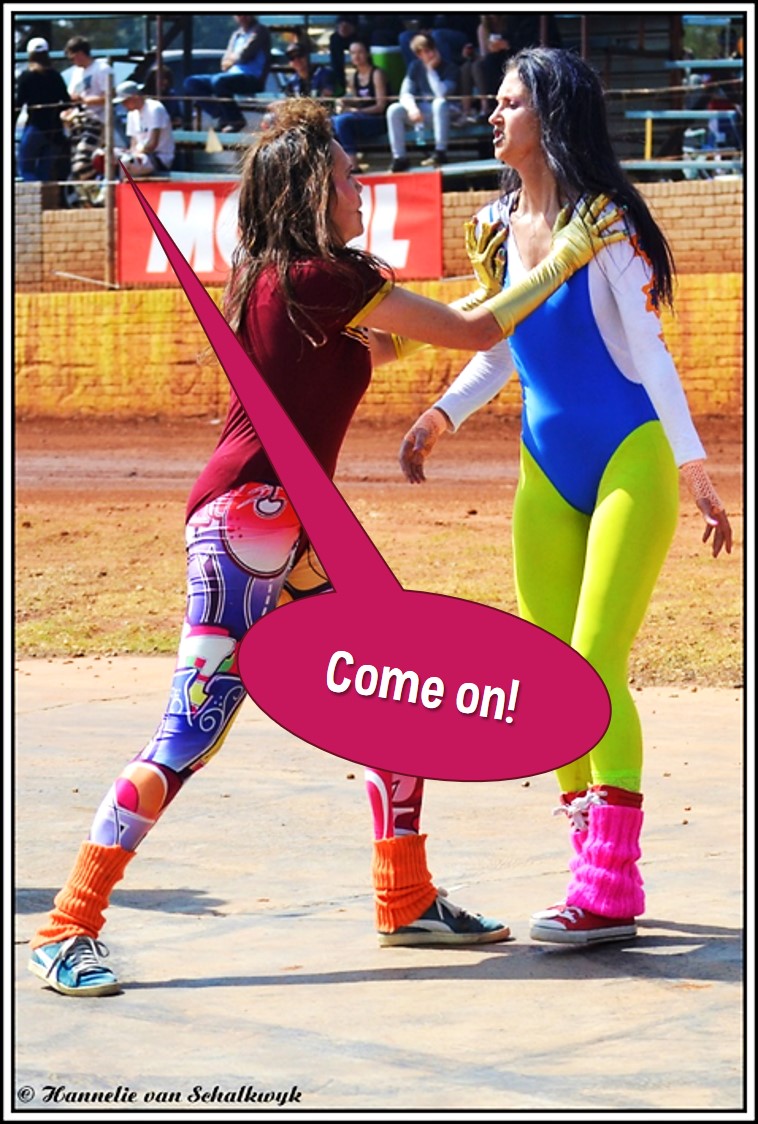 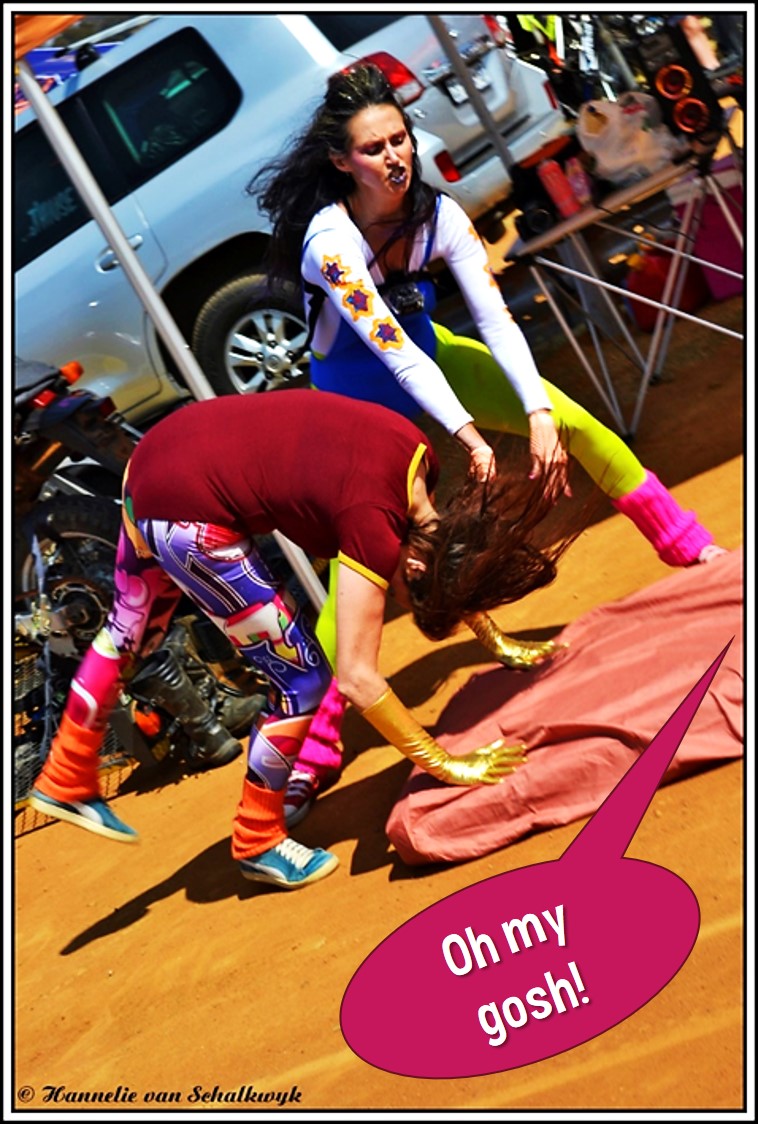 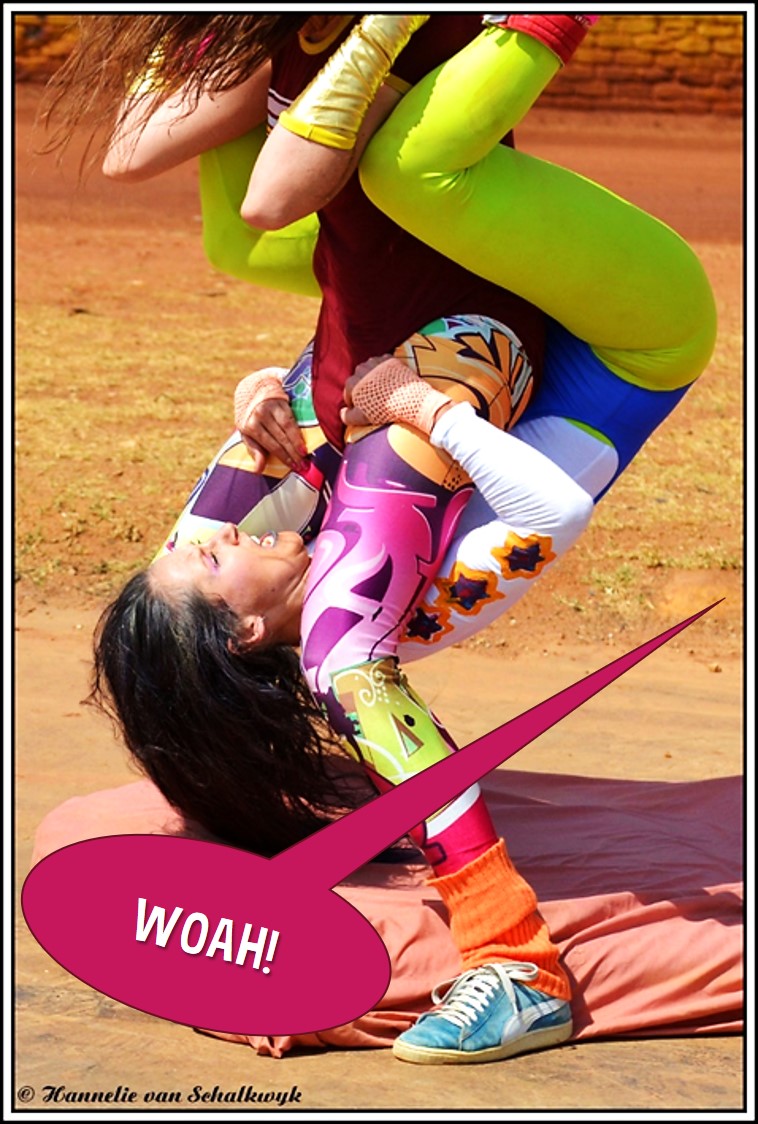 Somebody better check on her! She’s done for! She killed her! What’s she doing?!? NO! Off the top of the ladder! Did you see the impact?!? The Chikitar has been unleashed! The Chikitar strikes! Look at this! Look at the strength of that animal! How powerful! She's tougher than a two-dollar steak!

I was still recovering from the Argentine Leglock, when Chikita tagged in her secret teammate – CERBERUS! He pinned me down in the inescapable breast-hold-of-death. He got a solid 3 pointer!

…aaaand Chikita takes the next race!

By now we were not too sure if the supporters had an inkling of what was going on with these two neon-leotarts rolling around in the stof? A hush fell over the pavilion and then… a faint stemmetjie could be heard from the last bleachers, “Weeee want more!”

Dapple was purring like a kitten… with parvo. He needed all the help he could get.

I swooped in and with a well practiced choke-hold, I pinned Mercia down.

“Headstart Chikita, get a headstart!”

Chikita pulled a Phar Lap on the crowd by taking a slow first round before picking up her pace.

The moment she lost traction on that back wheel it was over for the rest of the field.

There was a well camouflaged KTM in hot pursuit. If you didn’t know better you would have thought it a scooter.

With sheer determination and expertly planned tactics, she didn’t end up last. Brilliantly performed there!

If you don’t win the rumble you have accomplished NOTHIN’! Edna! Look at this! Edna! All hell is breaking loose! For the love of money! The cage broke! Hip bone’s connected to the leg bone! WHAT?!? What is she doing?!? What’s it for?!? 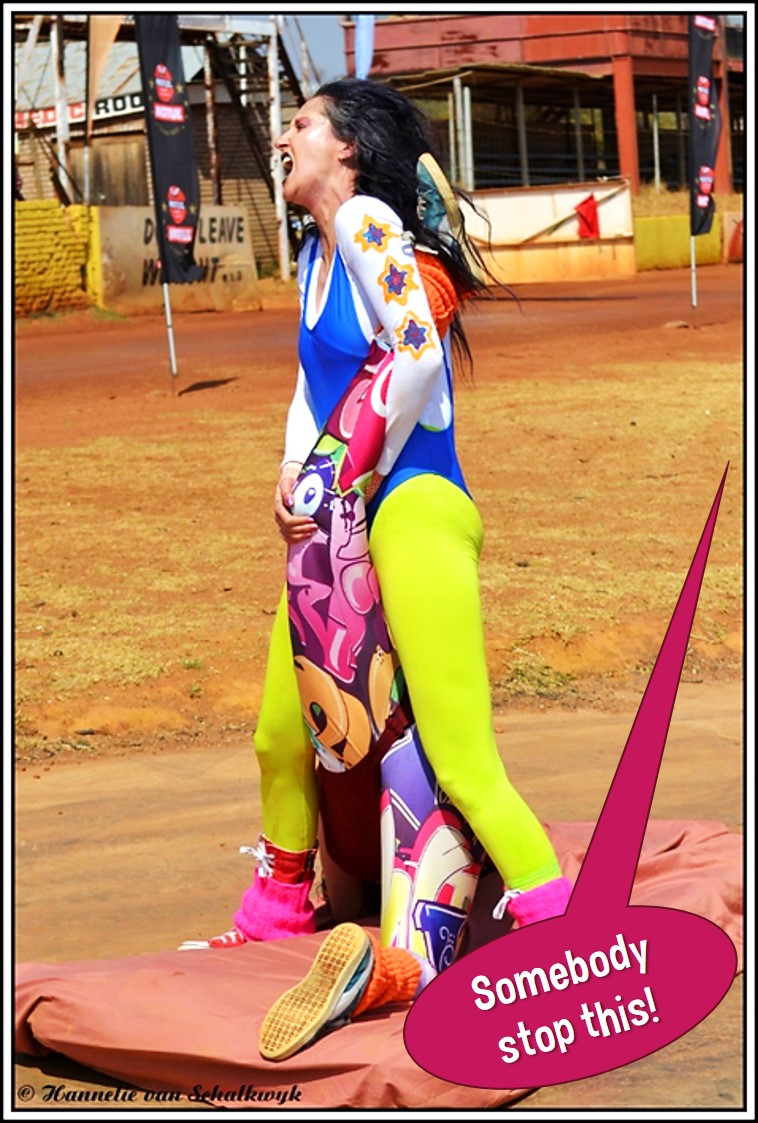 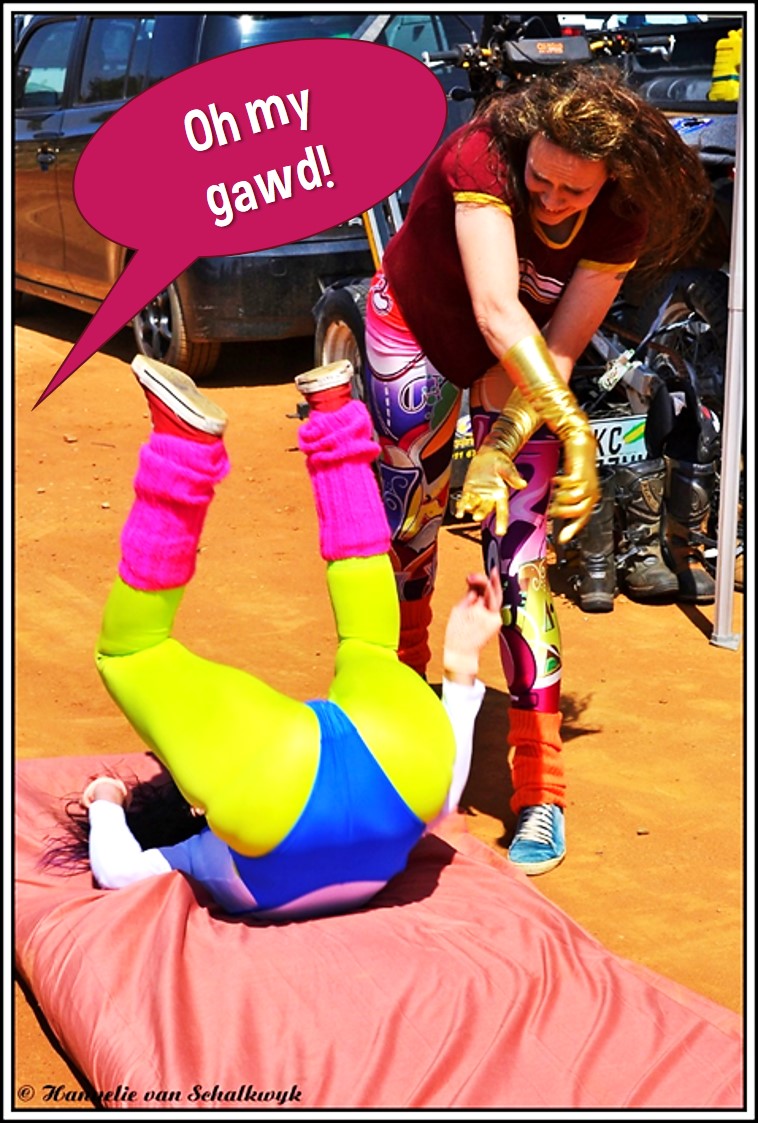 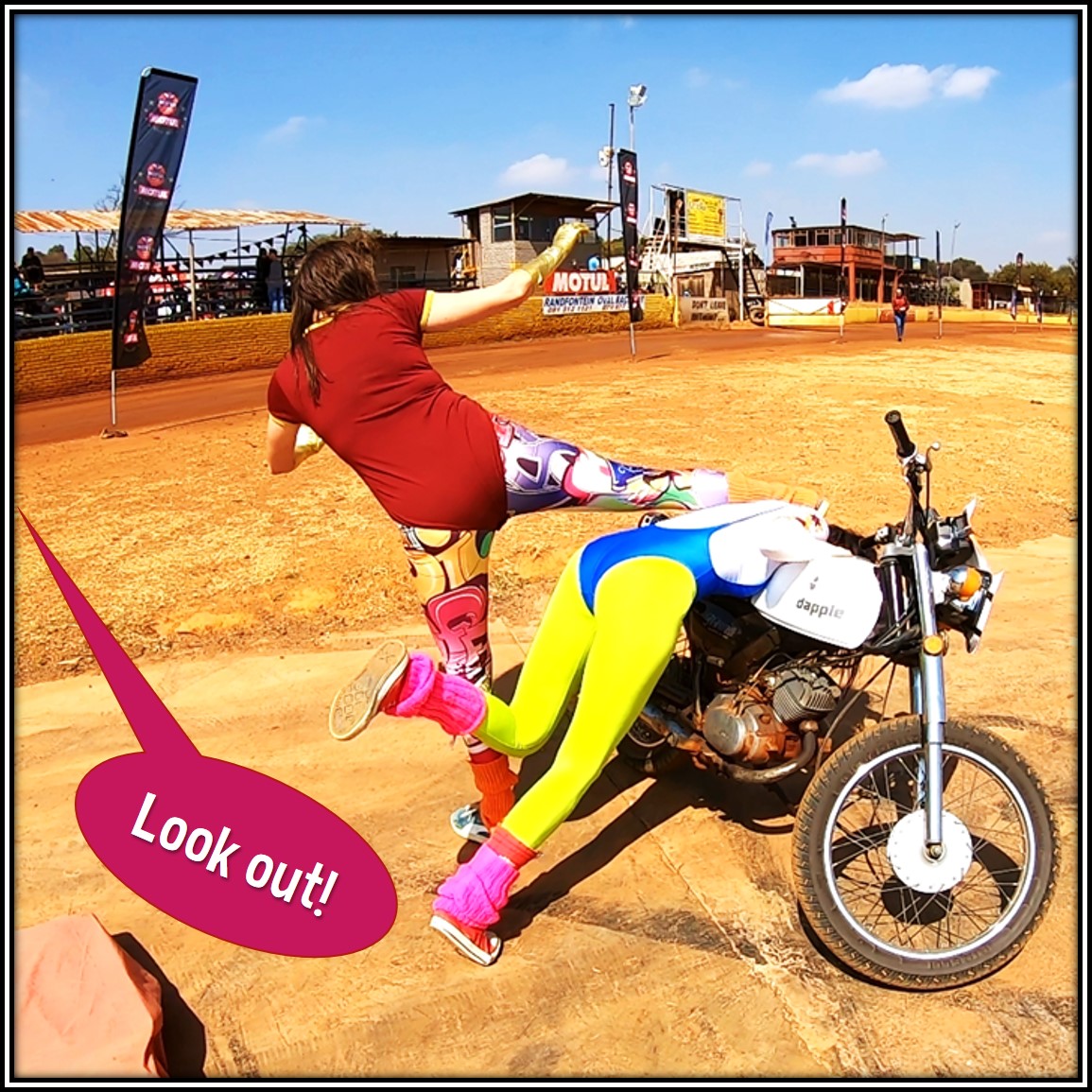 I don’t believe what I just saw! It's gonna be a Slobberknocker! Oh my! You’ve gotta be kidding me! I’m telling you one thing, we know this, it is on the line right here! As gawd is my witness! She is broken in half!

…and the Skinny takes it with a near perfect kant-punch!

Gladiators… ARE YOU READY?!?

Ummm… ja… hold on a minute…

Skinny rode as close to the inner circle as possible, because mathematically it meant she would travel at least 20m less than the rest of the okes. It was also dry(er) and not slippery as snot on the inside. 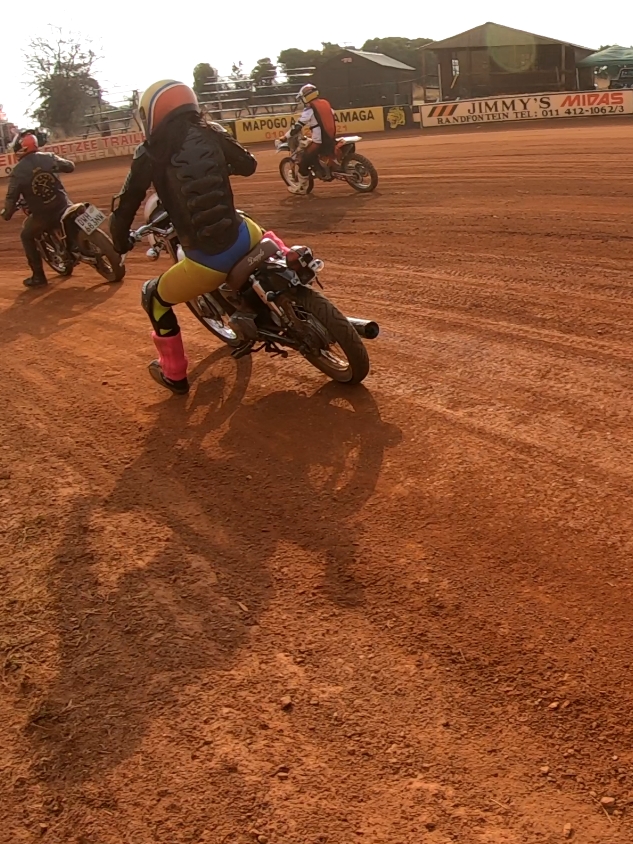 Problem was that it didn’t take long for everybody to realize this. Approaching a slower rider, you dared not brake (you would never be able to pick up speed again).

All you could hope for was that they would hit that bump at the exit of the first corner and it would send them wobbling to the right, out of your way.

I had a speed demon named Mercia on my back. She was the terror that flapped in the night. I twisted every last horse out of Dapple, but in the end it was the black angel that took the flag. So close – so close!

Stof was getting out of hand and they called in Old Faithfull to moisten the track.

Out of the corner of my eye, I spotted Chikita stealthily slinking out on the track while all attention was on the water truck. NOT OVER MY SKIPANTED BODY! It would be the fight of all rofstoei fights. This would be the last session of the day and we both wanted it.

I thought we have seen it all and then…! This is career ending! Good gawd almighty! RKO outta nowhere! What a maneuver! Look at the look of disdain on her face! The indestructible force meets the immovable object! One, two, she-got-her-no-she-didn't! Oh, you didn’t know! Your ass better call somebody! Lie, cheat and steal! Rest in peace!

Train, say your prayers, eat your vitamins! Whatcha gonna do, when Chikimania runs wild on you! Know your role and shut your mouth! Wooooo! To be the woman, you have to beat the woman! Get some security out here! HUGO – BEL DIE POLISIE!!!

It was the last championship race for the day and our belt-wearing-master-elbow-dropper had one last stof streep to cross. Could she do it? Could she keep Dapple running for four more laps?

Everybody wanted in on the last race. There were flying machines, bullets and super-powered scramblers.

Chikita weaved through traffic like a high quality wig. Cutting down the left, swerving up the inside.

As the laps counted down, the stof raised high above the pavilion roof. Who’s filter would survive this last lap?

Like a modern Amelia Earheart, she flew over the finish line. It might have been seventh spot (we’re still waiting for the photo finish). Dazzling, definitely dazzling!

During the day, there were some casualties. We had a fairy, a bunny, a postmaster, and a Margarita go down. The Margarita actually went down a few times. It ended up a Calzone…

As a last encore we were entertained by the fabulously famous Vesperados. They had a few particiPANTS on a wide range of Vespas. But they all had a flipPANT attitude towards the rules regarding gear as they considered it discrePANT against men.

All of them were anticiPANT of finishing a few laps unscathed, and they spread they joviality with a ramPANT rage.

Gerard was on a Vespa with a free-flow system…

“Of course I have a sole – you heartless bastard!”

Fish’s near perfectly running toot. He calls this one Smokescreen!

First over the line was Peter, then Jimmy, Rod, Johnson, Willy and Adolph!

The day came to a dusty halt, with engines overheating, riders re-hydrating and marshals picking up motorcycle spare parts on the track. There was only one thing left to do. Announce the StofSkop 2019 champ(s).

Skinny and Chikita of team SLOW!!!

Thanx to the three photgraphers/videographers:

It was the 2019 StofSkop flat track racing event, and we went flat-out at Randfontein Oval Raceway. We stomped like a hulk, landed like a rock, and ended the day winning a case of stone cold lagers (Viggo The Viking)!

How looong must this go oooon!!!