…better known to the world as the element for gold.

…better known in South Africa as the expression of astonishment.

Stig-kita and Skinny saw a golden opportunity to spend a weekend adventuring the Lowveld. It was time to stretch our Mitas again and lay some rubber on the long roads to the East.

Being almost 146 years late for the Mpumalanga gold rush, we decided to take the shortest route to Pilgrim’s Rest.

The first town on our map is better known for another sjaainy stone called a diamond. The biggest of these are currently resting on the forehead of a lady called Elizabeth.

We followed a neatly drawn line to a station. The train was late, probably the same one Oom Cyril was using?

The hotel offered ‘sleep’. We topped it up with a warm cuppa and some crispy bacon.

During the formation of Earth, molten iron sank to its center to make the core. This took with it the vast majority of the planet's precious metals — such as gold and platinum. In fact, there are enough precious metals in the core to cover the entire surface of Earth with a four- thick layer.meter

It rained a few days before and there were puddles and foaming streams everywhere.

Through the small town of Tonteldoos

Walls are all the rage these days, but this one had a spectacular view. Yet not insurmountable, it still took a few minutes to clamber over it.

A quick butt-flexing exercise before we rolled over Korfnek Pass.

Gold and platinum shouldn't be rare on Earth—they shouldn't be here at all! Or at least, they shouldn't be in Earth's crust. Nearly all of the gold in Earth’s crust came from meteorites that bombarded the planet over 200 million years after it formed. That would make your wedding ring 100% alien!

We crossed that bridge when we came to it.

At Loskopdam we savored the golden liquid of bottled hops.

A golden lock dangling on the gate, the Viro of love.

Every silver lining’s got a cloud that wants to rain down on me!

The clouds rolled in faster than our 700cc horses could flee. Big wet blobs started to pelt our visors.

How quickly plans can change! We picked a short-cut to Mashishing, hoping that we could keep most of us dry.

Gold is a highly effective conductor. A small amount of gold is used in almost every sophisticated electronic device. This includes cell phones, calculators, GPS systems, AND EVEN THE HUMAN BODY. There is a small concentration of gold in everybody’s blood. I meant it when I said I’m worth my weight in gold!

One of these days they will probably only live on in story books and folk legends. They are already scarcer than gold. We outran a herd of elephants, rode a zebra, wrestled a croc and patted a giraffe.

*We can be lekker daft, but we’re not nincompoops… These were all animal sculptures from the artist Dick Heysteck*

The ghost town of Pilgrims Rest welcomed us with open arms. Well… there weren’t any arms, but we imagined they would have been open if there were any. The town has an original diggers tented camp. If you sat quietly contemplating life on your koos, you could still hear the squeak of old Wheelbarrow Patterson’s worn trolley.

Mankind's attitude to gold is bizarre. Gold is boring, it’s dull - it barely reacts with any other element. Yet, of all the 118 elements in the periodic table, gold is the one we humans have always tended to choose to use as currency.

A simple process of elimination:

We would struggle to carry the gaseous elements around. Same would go for the liquids. It would be hard to identify the colourless elements. Some are poisonous, radioactive or even explosive. A few are nearly impossible to melt. Then there are the ones that corrode easily. And we won’t even bother to look for the ones that are too rare to find.

It turns out then, that the reason gold is precious is precisely that it is so chemically uninteresting.

We turned off a small track into the woods to go stake our own claim. When the sound of hammers and the clanking of the waterwheel faded to a soft hum, we planted our flag. 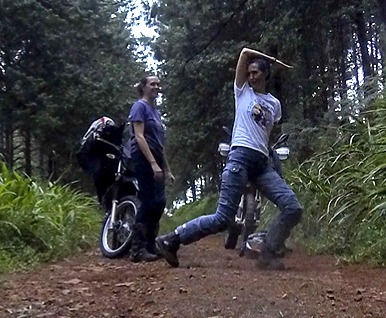 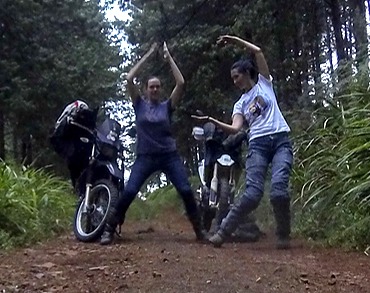 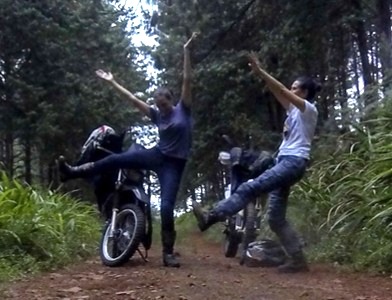 A magical joeniecôintjie came galloping in with cake (shaken, not stirred), balloons, party props and champagne (on dri-ice nogal). We had a bos-birthday with candles that wouldn’t die and a fire that wouldn’t start.

Waking up next to the last glowing coals, with pine needles in your hair and golden rays peeping through the canopy so not to stir, you know you’ve already struck it rich.

We freshened up at the falling water of the forest, rinsing off yesterday to make space for new memories.

How undeniably sarcastic earth can be with us mortals?

The element of gold is valued for its consistent and changeless nature. While we value water for its fluidity and flexibility. We therefor use that which connects us all - to extract that which isolates and separates us.

Our glittery gold got us a hearty breakfast in Graskop – we dined like queens!

You might be surprised just how little gold there is in the world. If you were to collect together every earring, every gold coin, the tiny traces of gold in every computer chip, every Egyptian tomb’s raid, every wedding ring and melt it down, it's guesstimated that you'd be left with just one 20-meter cube (three Olympic size swimming pools), or thereabouts.

We saddled our horses for a full day’s riding to the second steepest pass in South Africa – Mariepskop.

The half tunnel at Kowyns Pass

Riding through plantations, taking directions from creaking trees, hoping we get lost.

A town called Casteel, with no castle, no king, and no gold – but rich in colour, community, and culture.

At the bottom of Mariepskop pass, while chasing butterflies in the field, a small Renault sedan passed us on the way up. The old German couple must have misunderstood the tourist map that clearly stated the road is only for high clearance vehicles. We found them not far from there, stuck in the ditch next to the road. We tried to help by pushing, directing, encouraging them. But when the oom started rolling backwards, full speed down the hill, aiming straight for Brom and Melk, we spun those adventures out of there faster than Eskom can say, “Lights Out!”

We could hear the butterflies sniggering…

Scarcity and stability of gold aren't the whole story. Gold has one other quality that makes it the stand-out contender for currency in the periodic table. Gold is... golden!

Finding friends in remote locations is like finding a R100 note in your laundry. It was always there, yet it feels like a gift (James Rex and Christo Botha).

We decided to go have a look at the Blyderiver picnic spot (taking a small hidden road that turns off the pass).

At the entrance gate we met Erkuse Molobela (the security officer). When he found out that we come from Pretoria he begged us to go speak to mister Cyril.

No, no, no, he exclaimed! He just knew that we were neighbours (cause Pretoria is small like that) and that we are house friends with mister Cyril. So… to all my followers - there must be one of you guys that have a connection somewhere! Please could you forward Erkuse’s message to president Ramaphosa?

“Mister Cyril, we ask that you please fix the road to the Blyderiver picnic spot. We maintain the campsite in an impeccable condition, but because the road is in a deplorable state, we do not have any tourists or visitors anymore. Please mister Cyril – please fix our road!”

I have to report that the road is definitely not accessible to normal vehicles. Even on the adventure bikes, I reached a point where I was about to turn around (broken collarbones and slight dehydration from birthday babbelas played a role, ok).

‘n River – ‘n swing – a bunch of baboons as spectators!

What else could we do?

In 95 BC, the Chinese Emperor Hsiao Wu I minted a gold commemorative piece to celebrate the sighting of a unicorn. He must have seen Brom fart?

My mom always told me that learning how to use a cooking pan would stand me in good stead. I would have neva! But with our new-found wealth from gold panning, we spoiled ourselves with a luxurious night at the 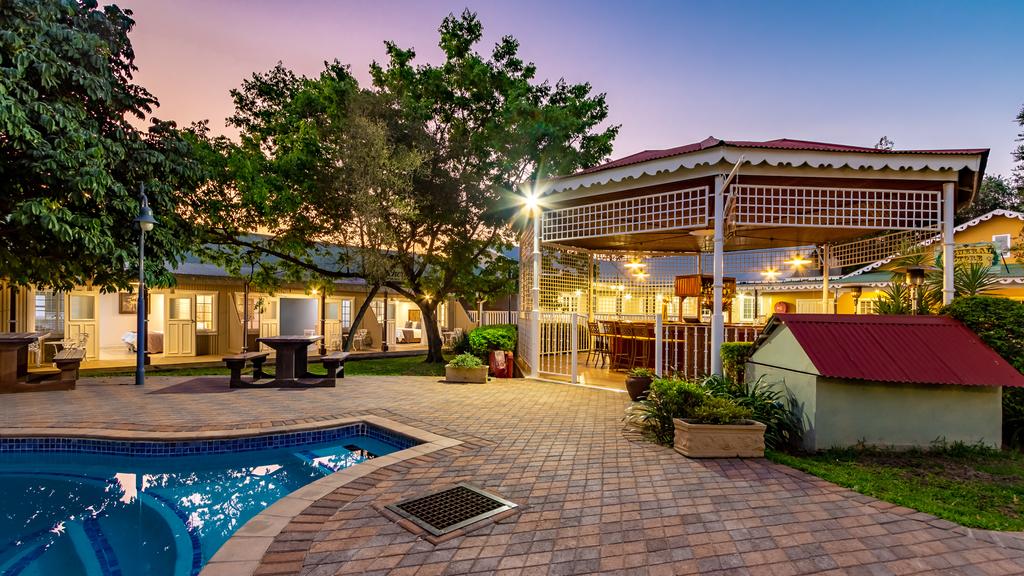 Willem Fick (owner of the hotel) took us on a Kruger Park fence ride the next morning. This is the fence that keeps wild animals like rhinos, elephants and lions in the park. And theoretically the poachers out of the park…

The railway system in South Africa is sorely underutilized. Finding a running tjoo-tjoo is scarcer than finding a nugget. In the olden days you would tell the kids to ‘gaan speel op die treinspoor’ to get rid of them. These days the kids will have to take a whole vacation on the tracks in the hope of ever seeing a train.

I should have said TOUCH WOOD!!!

Faster than a speeding bullet…

Friendly stalkers at the Ngodwana petrol station, sharing a lag and a swig of Mexican gold (Wouter le Roux and Pjero Nell).

The pass is not really open to the public, but with experience we’ve learned the value of a smile (and a half jack of tequila).

Clivia pass will always win a gold medal at the Pass-Olympics.

Scraping every corner, jumping the speedbumps…

Finding a deserted runway, then learning to fly! When you realize, you’ve never been earthbound…

We exited the portal that connects magical Mpumalanga with mind numbing Gauteng.

Adventure, smells of freedom The dust - of sunlight True friendship smells like a warm heartbeat But gold - smells of nothing.

Au is also an African word depicting surprise. Skinny and Chikita rode all over Mpumalanga, wild camped, had a surprise birthday party in the forest, found gold, stood on top of the world (Mariepskop) and lived in luxury for one day (Little Pilgrims Hotel). AU! We know how to do ‘adventure’!

Our gold might have been fake, but our spirit for adventure doesn’t cost an arm and a leg. It only cost money…