If you still don’t know anything about this event, you must have been hibernating under a rock in Papua New Guinea! Start dusting off, starching and ironing dear sir – you don’t want to miss it next year.

The DGR is a niche charity event to raise funds for men’s health and prostate cancer research. The first time men dressed dapper and rode around town looking all extravagant was back in 2012.

Since then the event has grown to…

650 cities around the world

We rushed to get Dapple (Suzuki BX120 SuperStar) ready for his first official public road outing. Magic Mike Puzey drilled a few extra holes in the back sprocket, sharpened the teeth on the front one and wrapped around a new chain.

On the morning of the ride, Dapple developed a serious case of influenza (in bike terms it comes down to throttle-cable-snap-flu).

Luckily Nicci and Ilse offered us two bikes to borrow. I was back on that magnificent beast called Argo (Ducati Scrambler Desert Sled) and Jols borrowed their Triumph Scrambler – with an exhaust that screams authority!

Jols looked all peachy and dash.

What they were wearing: It was a donation from Cinderellas Costume Hire aka lost property that got a new owner

What bike they were riding: Vespa Sprint 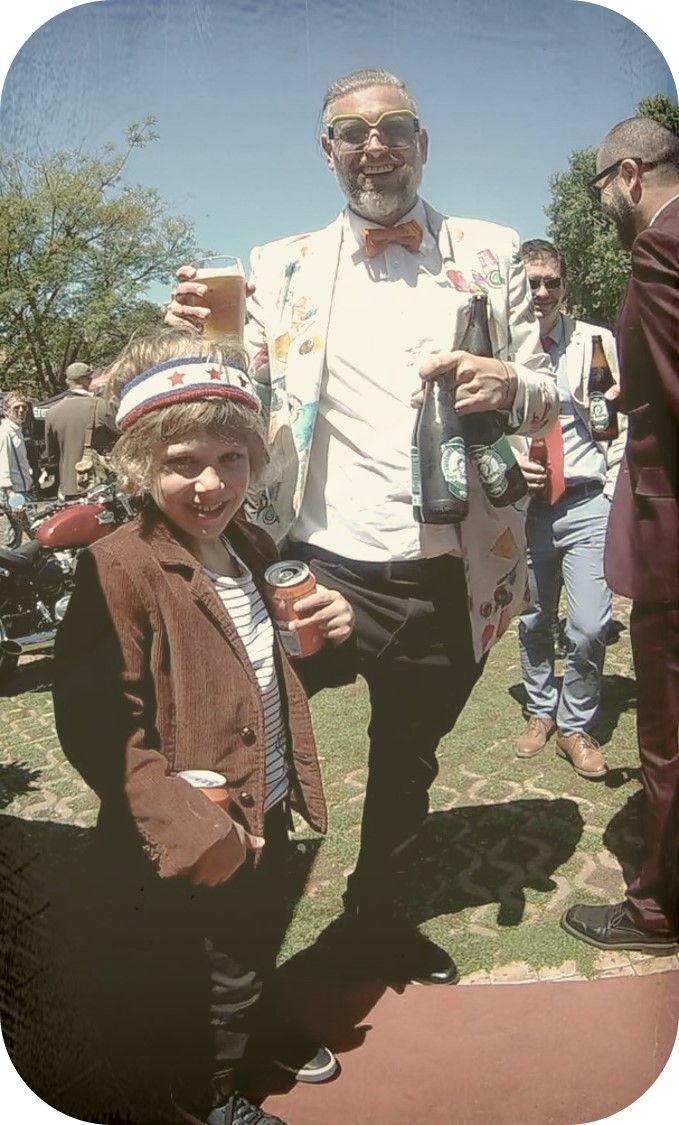 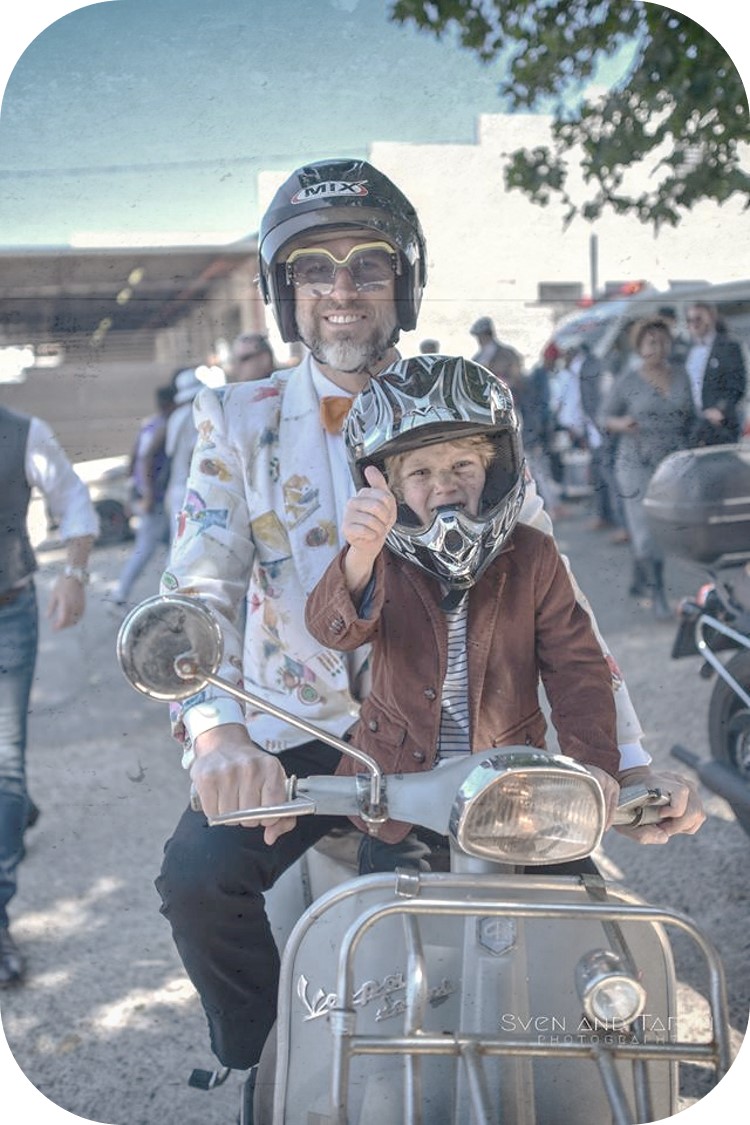 What she was wearing: Laurika is the sister of the geologist that opened Tutankhamen's tomb. The style runs in the family! Their sense of humour as well. Assisted by Wardrobe Studio, they rounded off the 1882-look to the T with a pith helmet and a Frank B Ernest tie.

What bike she was riding: BMW R100 Dakar 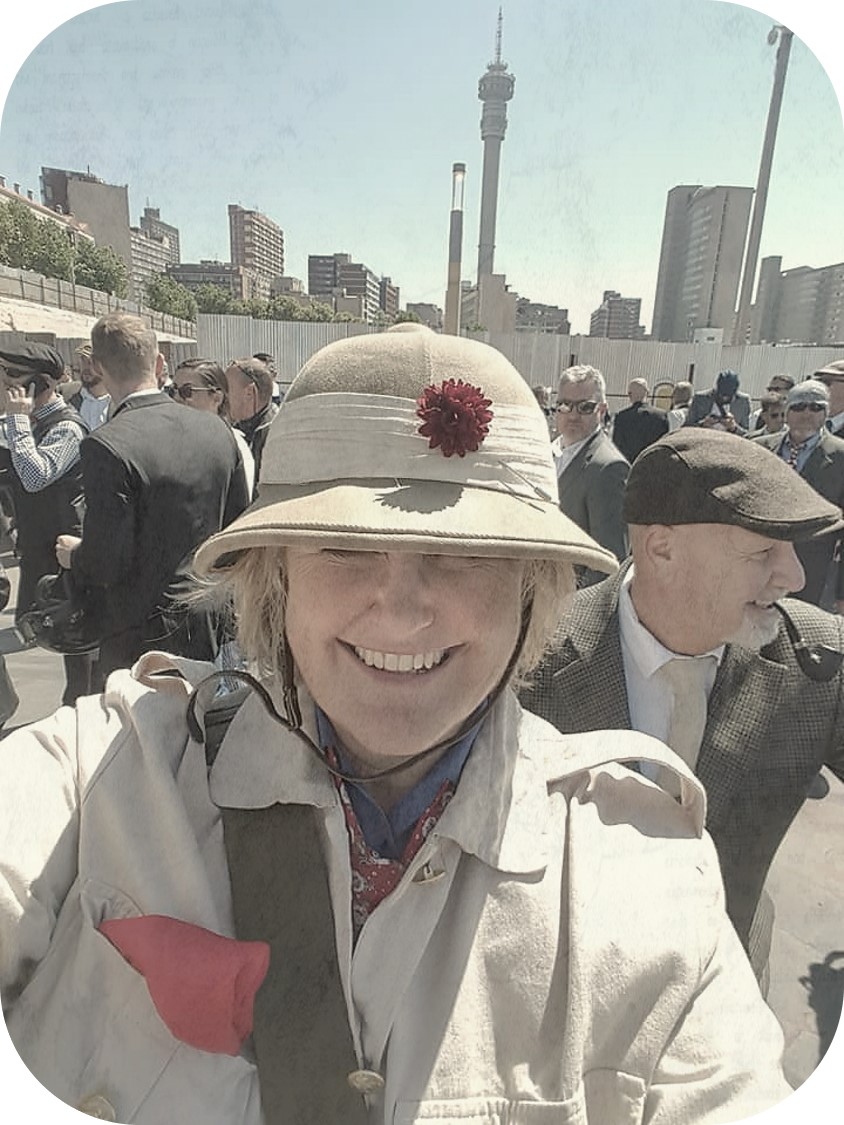 What he was wearing: The jacket dates back to early 1980, when they still made REAL leather jackets for REAL twak-chewing men! 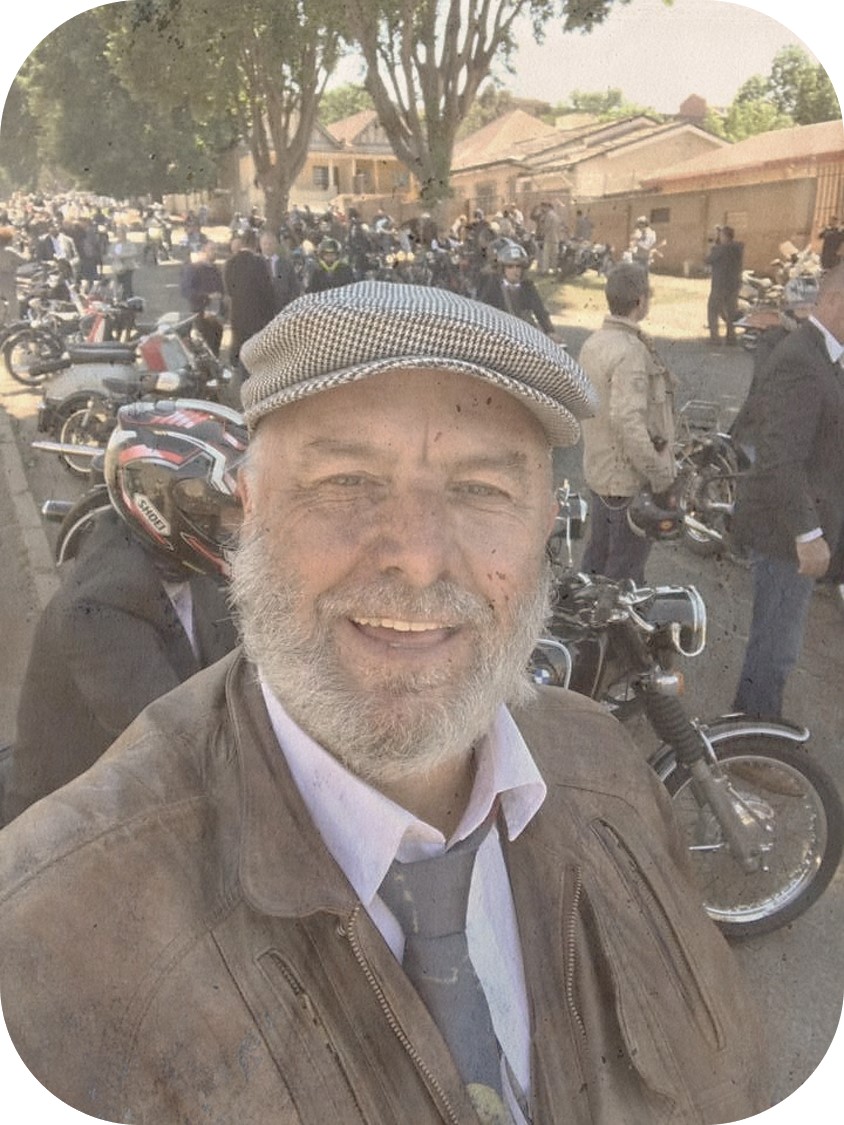 What she was wearing: Just an old frock from the cupboard (1938) and some Jimmy-shoes 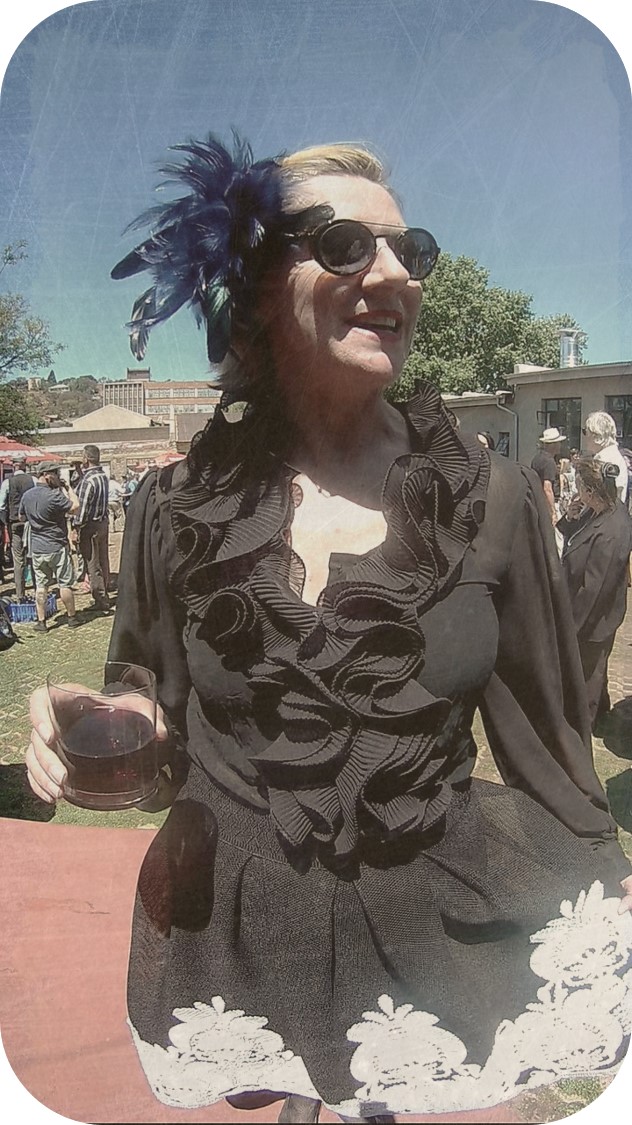 What he was wearing: The suit was tailor-made by a guy called Alex from a market in Rwanda

What he was riding: A Yamaha something scramblerish – SR250? 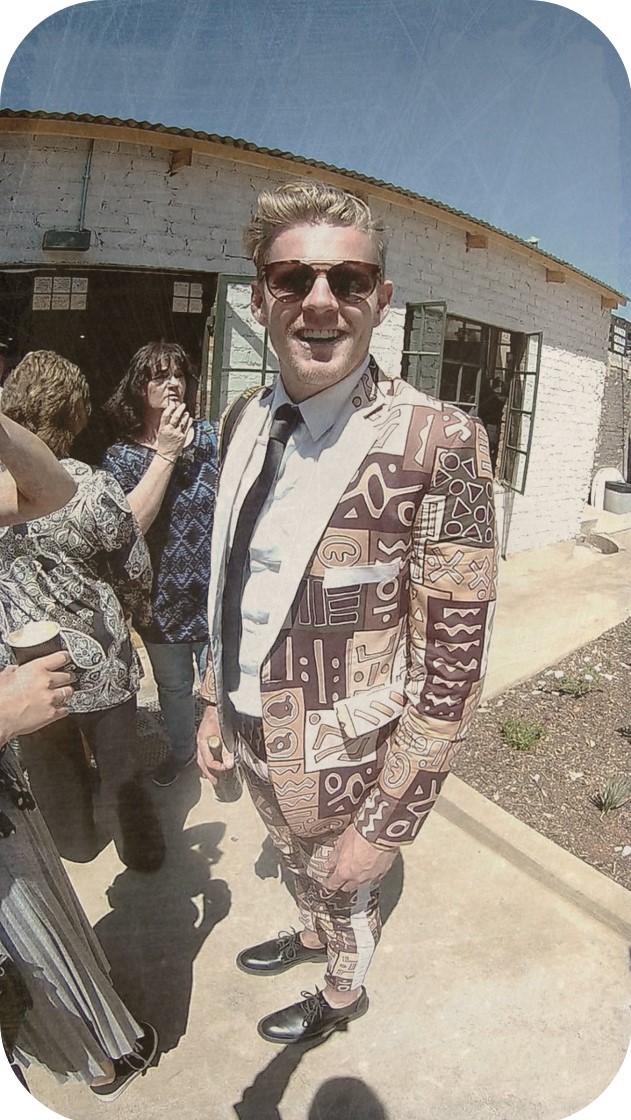 What he was wearing: This suit (including some other items) were imported from Vietnam. He met a tailor on one of his international-road trips who custom made him the suit for a mere R800. It has a lovely paisley lining, and although it has dated and faded a bit, it still drapes with style.

What he was riding: Vespa Sprint Veloce (1969), pillion included 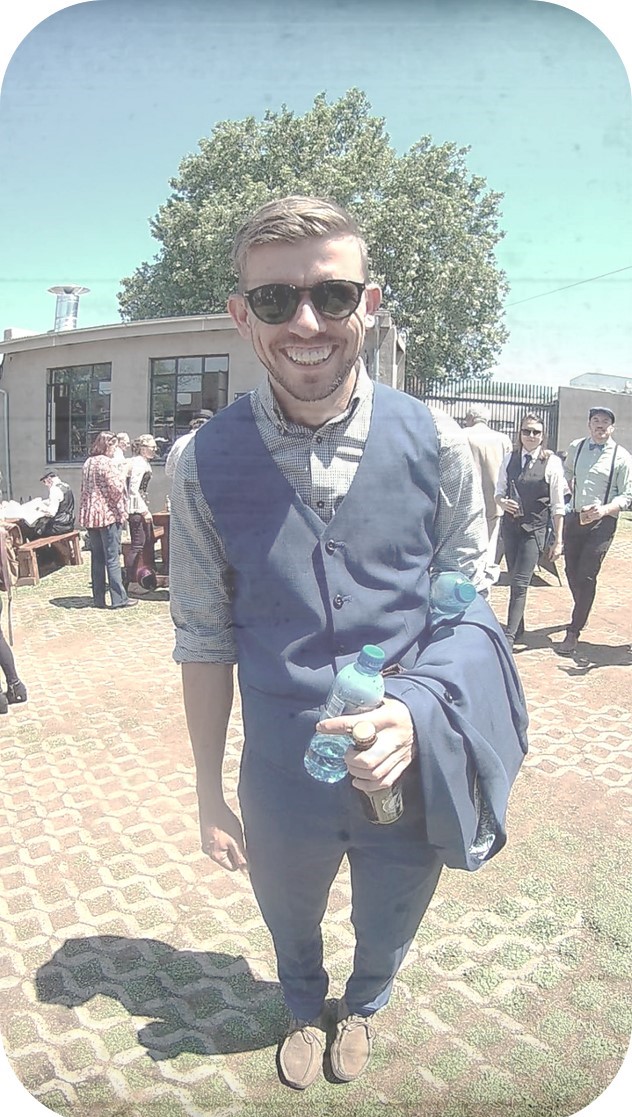 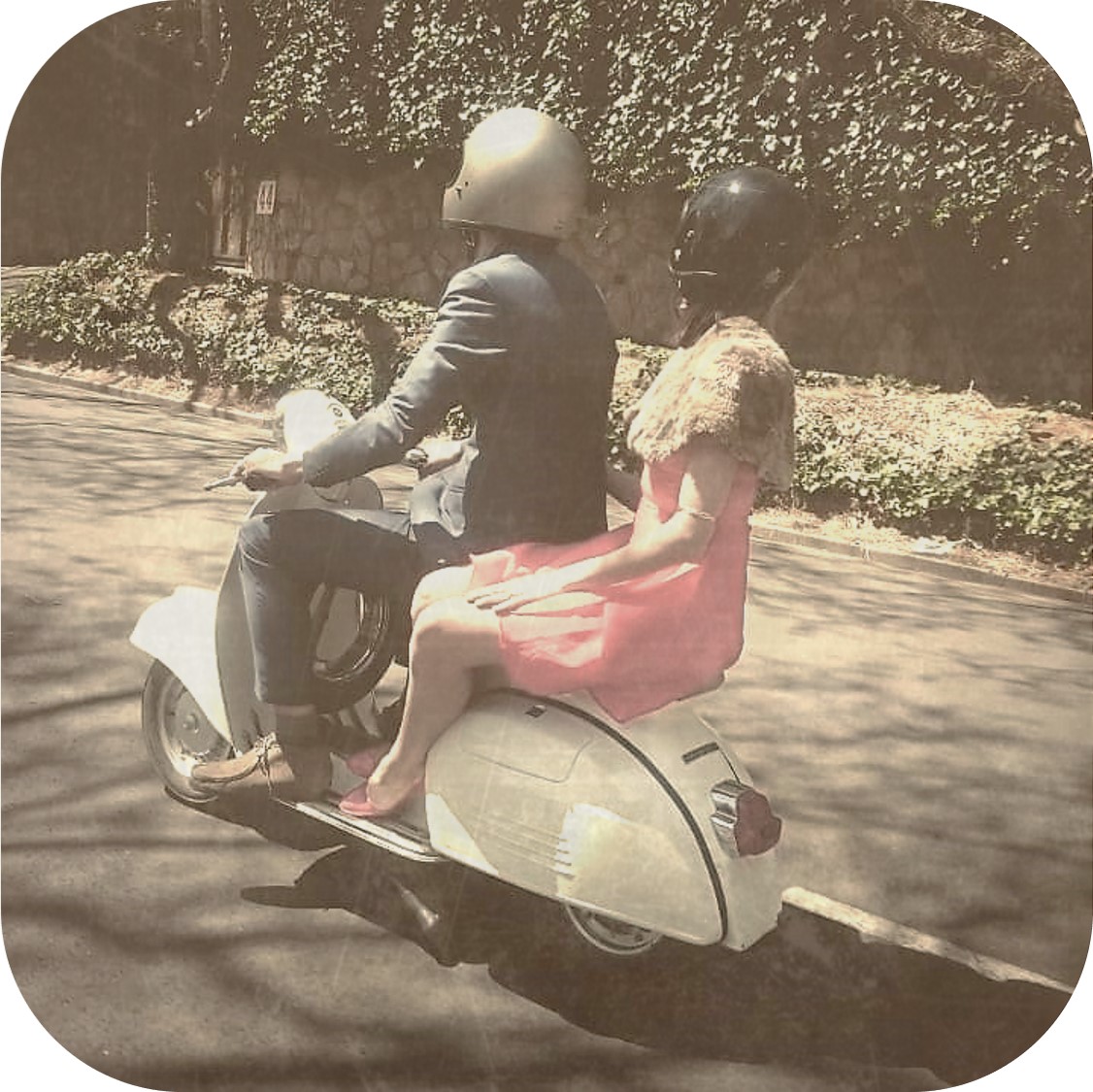 What he was wearing: It is actually his dad’s old traditional Austrian suit, circa 1970’s 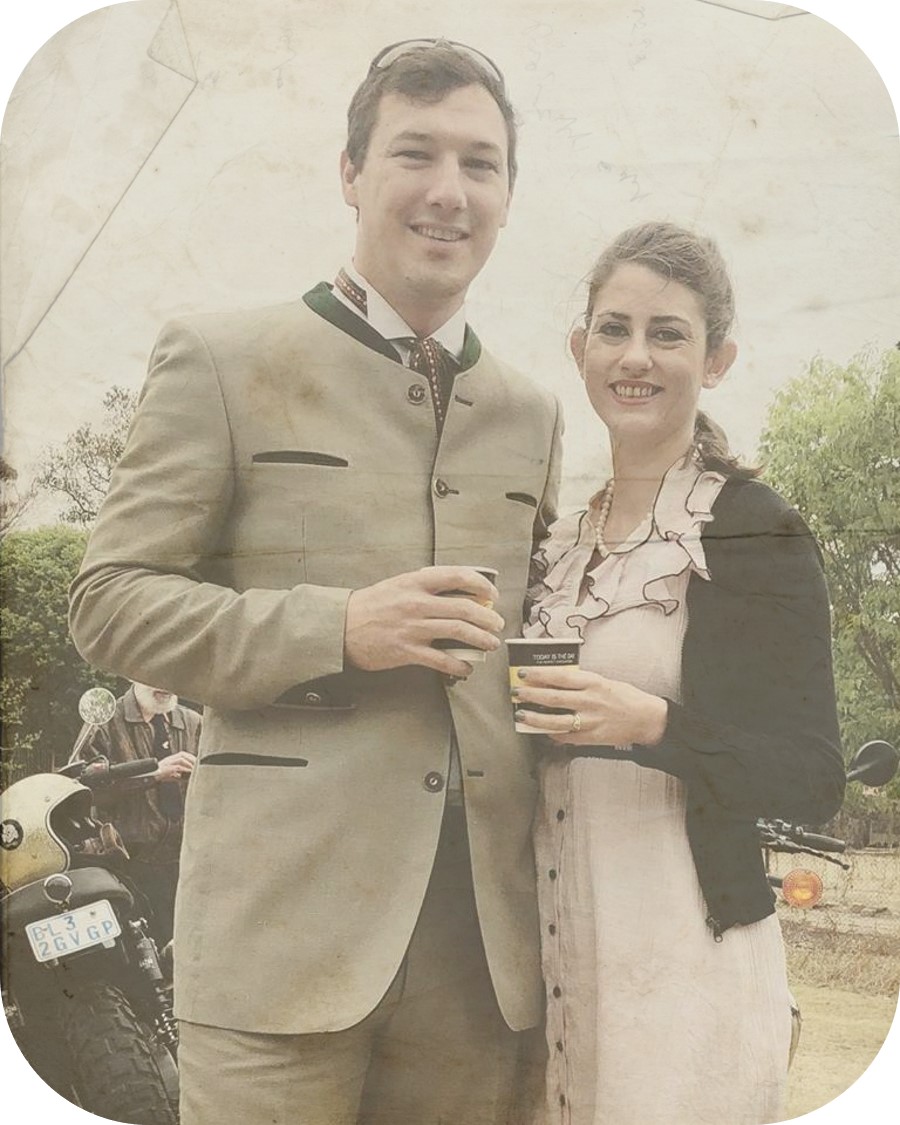 What he was wearing: A timeless Woolworths suit for every wedding, christening service, funeral, and even a divorce or two (I hear they throw parties for those these days).

What he was riding: Triumph Truxton R 1200 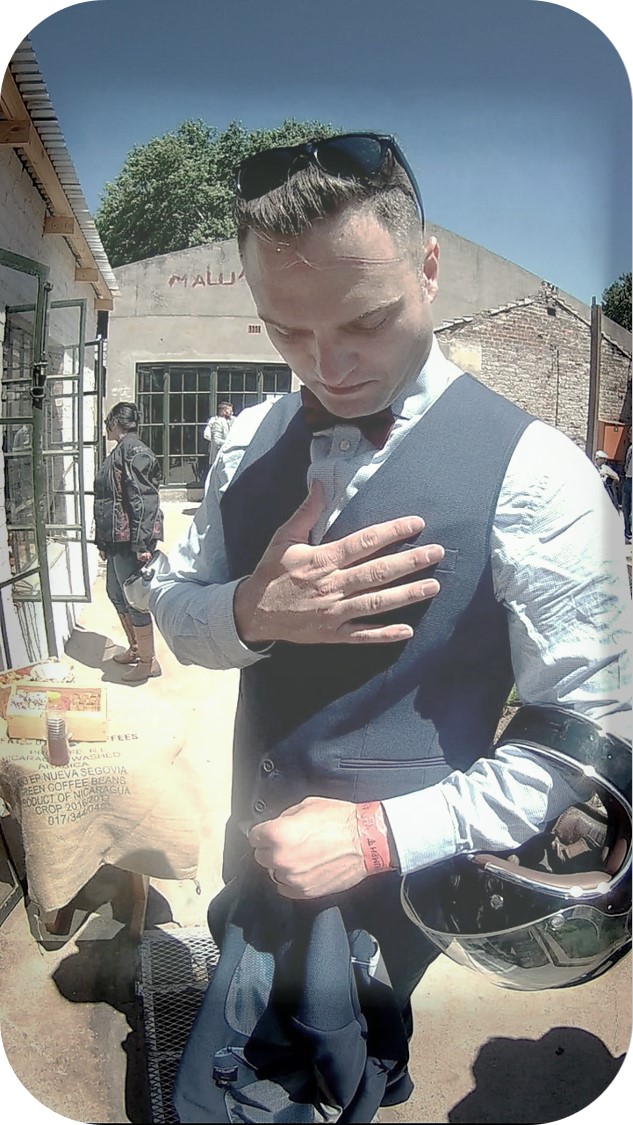 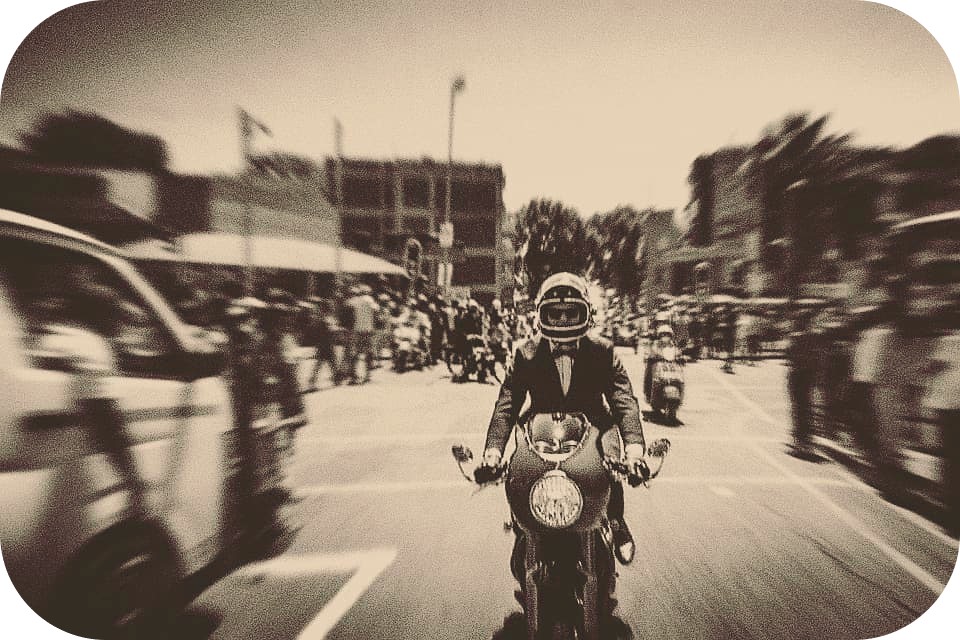 What I was wearing: My head-girl blazer from Laerskool Birchleigh, complete with the head-girl balkies and the farewell speech notes still in the pocket.

What I was riding: Ducati Scrambler Desert Sled named Argo 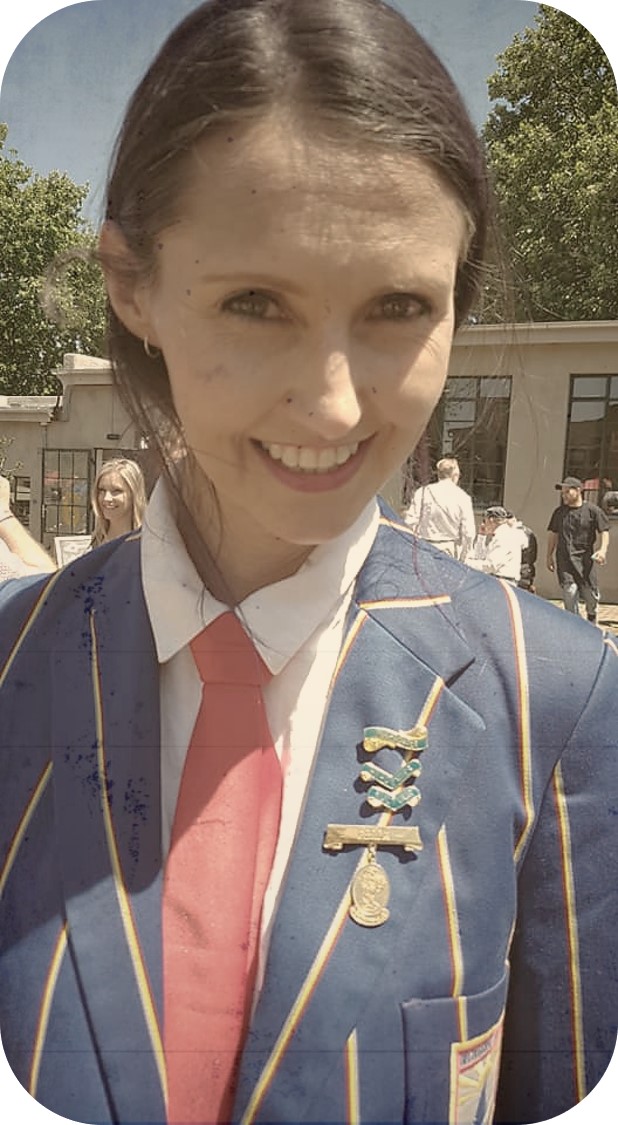 I donned my hoofmeisie blazer from back in 1990 - Laerskool Birchleigh will be so proud.

Hey! Everybody stop giggling!!! Once upon a time I was the epitome of voorbeeldig. 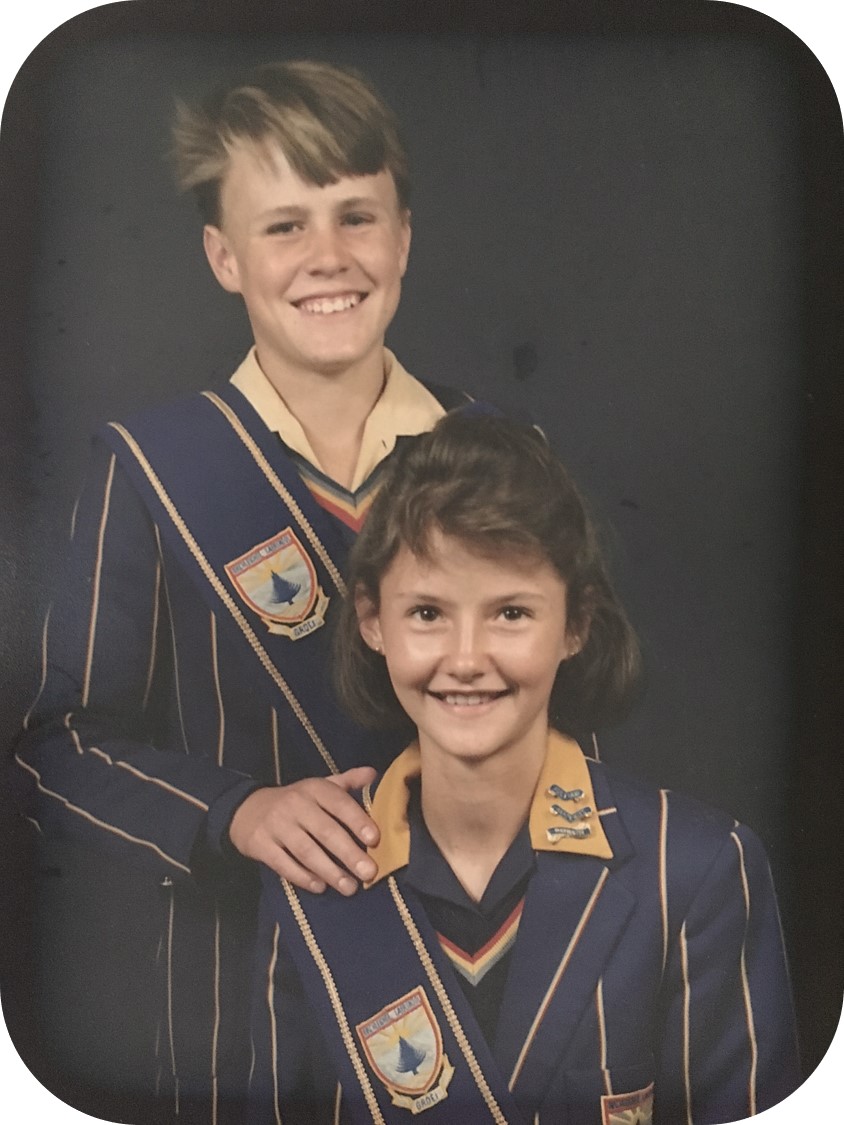 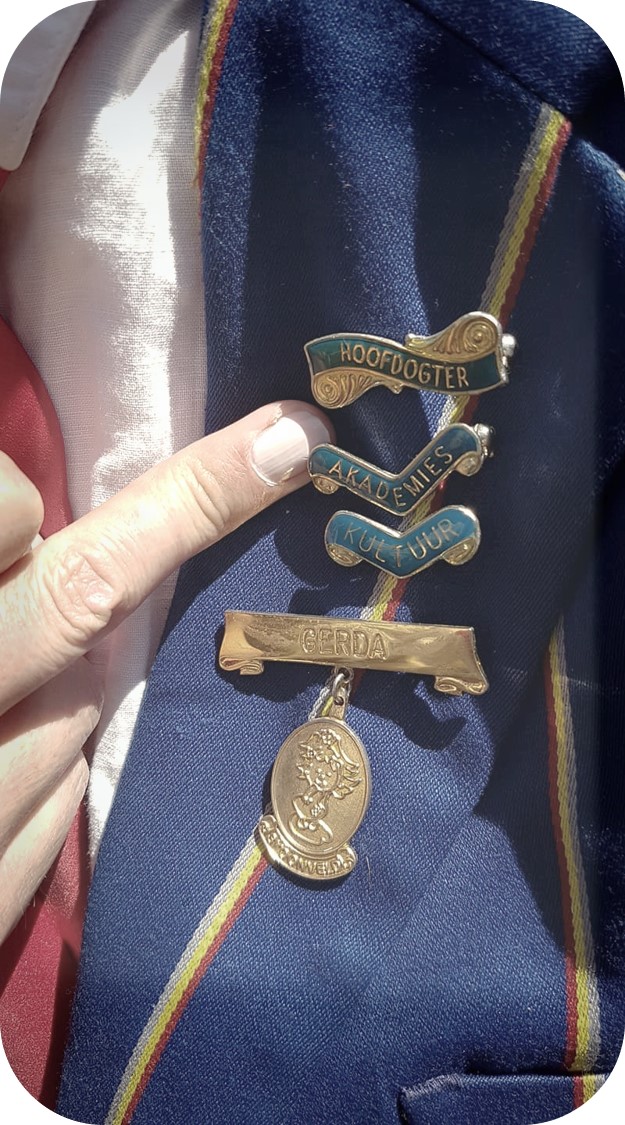 We marched through the streets of Johannesburg being all suave and sophisticated. There were thousands of bikes roaring past pedestrians that stopped and stared in awe. We be the men and women that will try and make the world a better place, because we want to!

There were a few unhappy misters that were asked to either leave the procession or move themselves to the back.

The theme of this event is about dressing, riding and behaving dapper. Ask yourselves, “Myself…” would a KTM 1290 lean to the vintage side OR to the hooliganmotherfromdeepearth side?

I know reading has gone out of style after the big scare of Y2K, but maybe check out the style guide on https://www.gentlemansride.com

THEY EVEN HAVE PICTURES!

Ride anything classic, vintage, a café racer, a bobber, a tracker, a scrambler, an old school chopper, a modern classic, a sidecar, a classic scooter or a brat styled motorcycle. If you really can’t fathom what we mean by these words – think of anything dating between Jan van Riebeeck and Charly Chaplin – you should be safe... 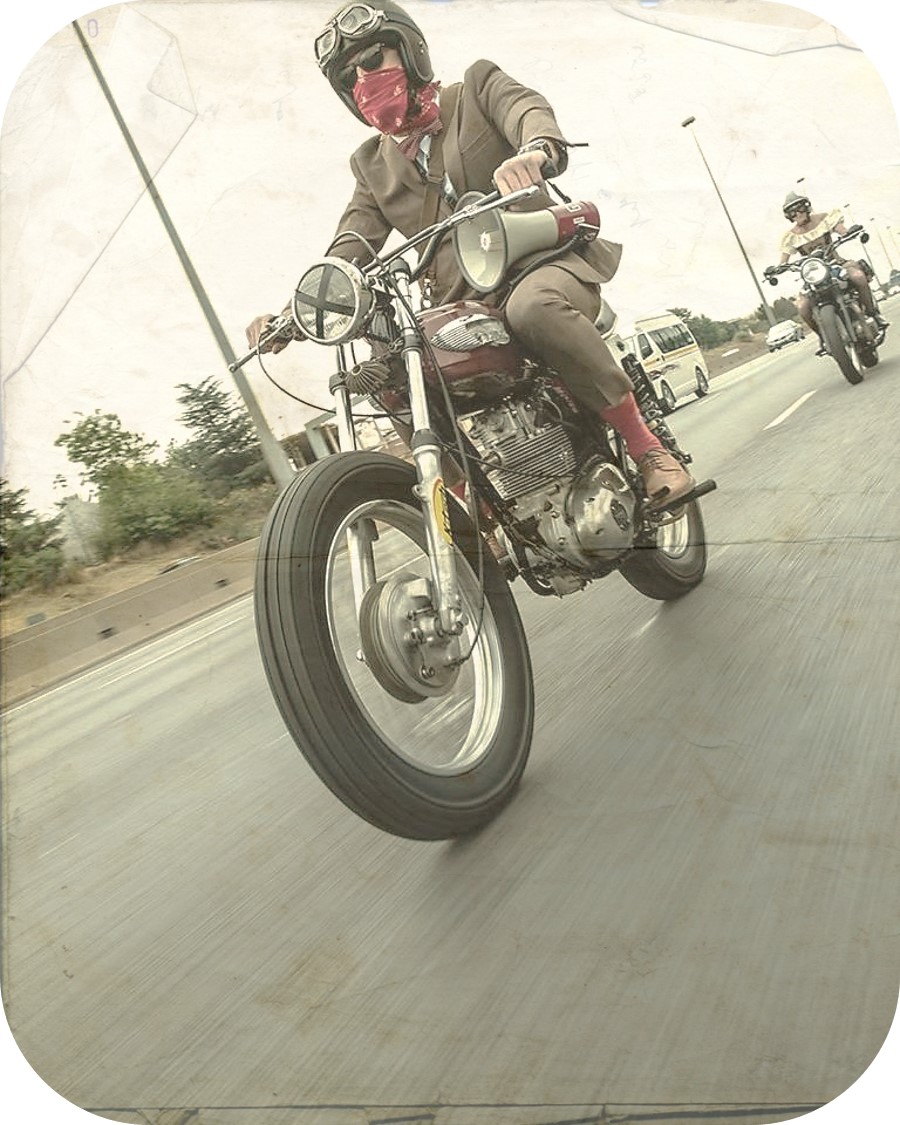 Oh… if only we could travel back in time!

But we did dear sir, if only for a day…

*Most of the kiekies were taken by ZC Marketing Consulting Team and used with permission from Motul. Some are from Richard Harper. And a few were gapsed from FaceBook – so kill me!*

Thanx to the South African sponsors for organizing and hosting this event!

Skinny and Chikita attended their 4th DGR run. Skinny, dressed in her hoofmeisie jacket, and Chikita just looking DASH. We joined the 115 000 gentle bikers around the world in support of men's health.

It takes a lot of money (1) to stay slim enough to still fit in a jacket 30 years later (2) to wheelie, crash and mend (3) to keep everything oiled that needs to be oily – biodegradable AND non-biodegradable parts.