The most dangerous job in the world today is…

Being a 3-ton beast adorning a keratin horn on the end of its nose.

The second most dangerous job is protecting said beast.

So, the Tank Girls decided to do a charity run in aid of the Rhinoceros and their bodyguards. We would drop our pants and ride from Pretoria to Johannesburg. Some criticised us and asked how this would help save the rhinos.

Those rhinos where so thankful, they pranced around like silly fat unicorns.

…and that’s not to mention the smiles and laughter, the giggles and thumbs-up we got from the general public.

We were a small gang of bikers that got together at the Union Buildings. These buildings are the HQ of our country’s big induna. He must have heard the commotion outside… we were not skaam!

People willing to make asses of themselves, CHECK!

To bring you up to speed:

Last year 1 028 rhinos were illegally killed. That makes it THREE rhinos a day!

In science we know that everything must end (except maybe a prime number), but when we are the sole reason for that ‘end’ we should not pat ourselves on the back.

The cry for help of these funny-toed creatures are falling on dowe-ore.

For 2000 years, the Chinese have believed that powdered rhino horn could be used to cure all kinds of old-people ailments. The stuff you always heard the grownups complain about when you were a child; gout, headaches, rheumatism…

In other words, it does NOT work against pain, inflammation, muscle spasm, stomach ailments or cleaning up wounds… Specially not if the rhino gets to you before you get to the rhino.

The rumor has been that it could also be used as an aphrodisiac, but the rice-munchers vehemently denied these claims. Seeing as they’ve tried to cut down on patla-time for their 1-child policy – I’m taking their word for it.

Madiba gave his full support to our cause!

Though… he was a bit shy to go out in public. We had to give him a nudge.

Time for us to shock the streets.

LET’S GO SAVE THE HORING!

In our fantasies we imagine up strange beasts like gargoyles, gremlins and dragons. Then one day, you see a rhinoceros… If they become extinct, they will join the creatures of our dreams.

For the days you cannot saddle up your rhino, you tame another beast. This one was on loan from Biker’s Warehouse. Blerrie hel – it was hard to give him back…

Whenever you are in the meerderheid, you are allowed to wear the minderheid.

The last time I had a disANGRYment with a traffic cop, my decibels outblasted Mariah Carey’s. But this time our pantless powers disabled all authority.

We stopped in town at ICW for a quick wake-upper.

The restaurant started filling up but no-one gave us even a skeef glance.

…until we got up from the table for our cover-girl photo shoot.

People were gawking, shaking their heads, giggling and pointing at us.

But we had to eat, off to our last stop.

A group of rhinos are called a crash. A group of bikers sometimes too.

There has been a recent surge in demand for rhino horn in Vietnam, where it is being touted as a hangover cure.

A rhino must get hornless because we got legless?!?

Whenever anything bad happens, Skinny and Chikita is normally responsible!

There is NOTHING as uncomfortable as a panty without a pant!

Our last stop was at Rim & Rubber in Fourways. We pulled in and the place fell silent…

One of the artistic features of this mall is two wood carved statues of elephants. How sad to see that even these pachyderms have been poached for their tusks. Here here little one…

Tequila for some onderbroek courage.

Rhinos are known to kill their own. They use their horns during posturing to defend their territories. When the game gets a bit too ruff, their sharp nose-daggers can give mortal wounds.

And yet, they are no match for human blood-lust.

There was a bit of confusion about the models in the original event invite. Here are the REAL Slim-Shadies! 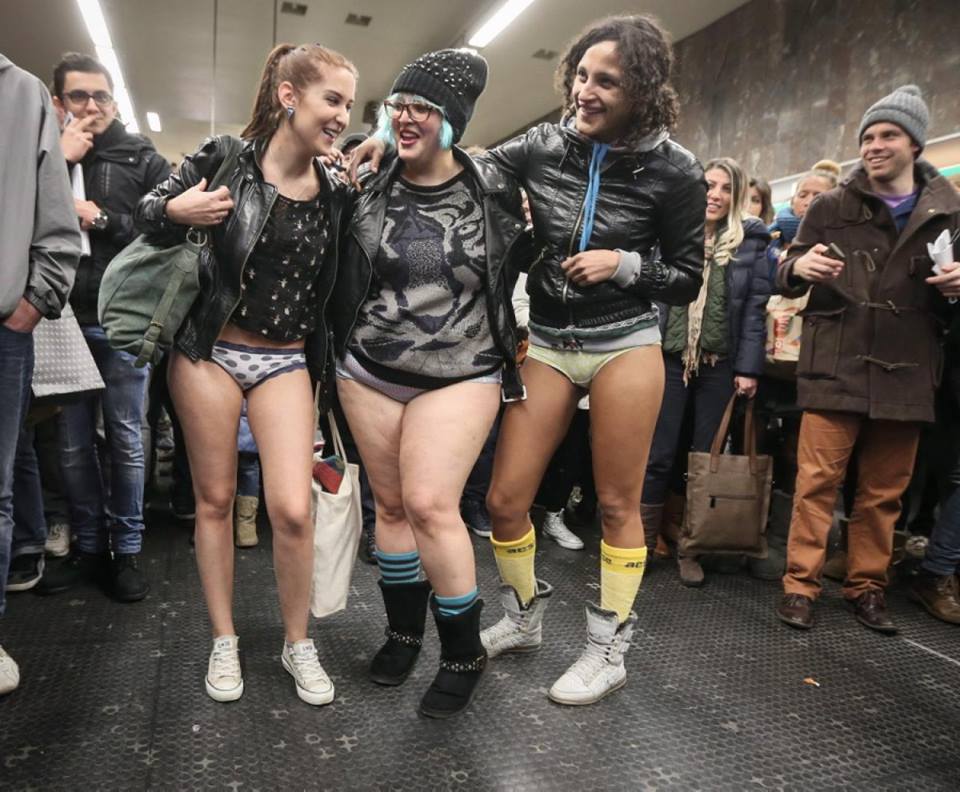 The fear about a wheelie in broekies is not so much about the potential roasties, but how do you hide the skid-marks??? 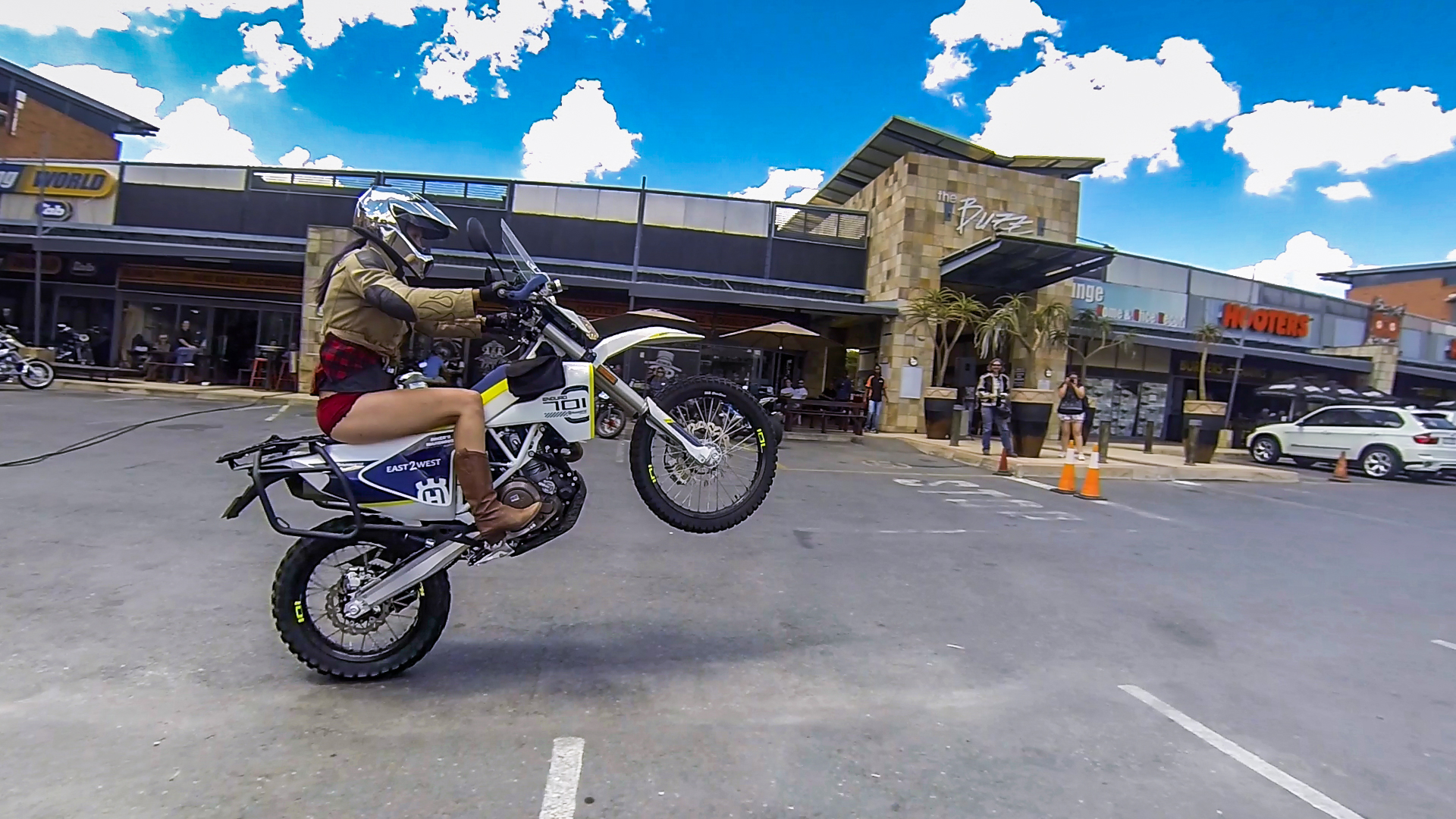 This world runs on energy. The energy of every living being. On how we treat one another. On how we care or how we destroy. It astonishes us how destructive humanity can be.

And, maybe we can’t save the world, maybe not even a single rhinoceros. It might seem hopeless, that we can’t make a difference, that there is nothing we can do. Life is a struggle, but it's cowardly not to put up a fight! All you have to do is just…

Thanx to the photographers:

And some by Hannelie van Schalkwyk, Jolandi Mentz

A group of under cladded, tree hugging, horn loving bikers take skaamteloos to the streets of Gauteng to raise funds for rhino conservation.

If Superman can – so can we!

In Vietnam, rhino horn fetches up to $100 000/kg. But for a meagre donation you can have this entertaining, informative, sort-of-scandalous newsletter instead.

Skivvies in the wind!