The English word HOLE has such a ninny feel to it. The Afrikaans version covers a much wider range of feelings & situations. It’s one of those lekker words. One that draws attention, yet not rude enough to offend. Let me show you some examples…

I rode down to visit Kraai. She has relocated to die-gat-met-‘n-dorp: Kimberley.

I missed most of the pot-gat-ed tar roads, but ended up shaking my intestines to slush on the rutted dirt roads.

There was a short-cut through a rough neighborhood (aan die gat kant van Johannesburg) and I wondered why people are afraid of this country? A lone ranger with a pink helmet galloped through a squatter camp, over sewerage water streams and past mange dogs, and yet the worst that happened was a smile and wave from a little pikinien.

I stopped at the Danie Theron monument on a hill called Gatsrand. Though Danie Theron has received many honors for bravery and nerve, there is an award that never made it to his rankings. One, being the founder of the first BIKE club in SA.

Danie is best known as the driving force behind the formation of a military bicycle corps used by the Boer Army for scouting and relaying messages. During the Second Boer war, he was put in charge of the TVK MCC (the MCC part was added by me), the Theron se Verkenningskorps (Theron Reconnaissance Corps).

While Danie was out alone in the field investigating the surroundings, he ran into seven mounted troops (those with a British flavor). He quickly opened fire and killed three troops while injuring the other four.

Unfortunately, his gunfire drew attention from the escorting artilleries and they opened a bombardment on the hill during which he was killed.

Maybe he lost his life, but he made gat-skoon before he left.

I still had a few hundred kilos to tick off and there wasn’t much to see. South-Africa is classified as semi-arid, but with this year’s drought we lost the ‘semi’ part.

I clocked in at Kraai’s office just in time for the beer-break.

The next day we had to go check out this world renowned GAT. It might not be as famous as Miss. Kardashian’s but at least it doesn’t have the sun shining out of it… rather a few forgotten diamonds.

We took a lift on the tram and got into a battle with an Isuzu bakkie at the first traffic intersection, where he nearly saw his gat. Said Isuzu decided that the tram was too slow and in his way…?!? But our driver lit up the tram like a disco ball, accompanied by at least 20 deafening sirens. The Isuzu ran away with his tow-bar between his legs.

Over 22 million tons of earth was excavated and 2 722 kilograms of diamond had been scavenged from it.

We took a walk through ‘old’ Kimberley, where the larney houses were built from zinc. I imagined filling up Barney Barnato’s Benz… and maybe getting a small shiny stone as compensation?

In the stampede during the diamond rush, there were only two kinds of people that made money: The lucky… and the prostitutes. Apparently the church wasn’t too fond of the lucky.

We found a saloon to drown the gat in our thirst.

We then left to find the Pioneers of Aviation museum. The gate was locked, but the fence around the property was uummm… missing! Obviously the gate is only intended for trustworthy trespassers.

Kimberley opened South Africa’s first flying school in 1913. They trained the pilots for the South African Air Force (the 2nd oldest Air Force in the world). We took a kiekie through the window…

…and onwards to the gatslag!

Years ago, I found a copy of Etienne Leroux’s book ‘Magersfontein, O Magersfontein’. This book was banned during the 70’s, mostly for making the establishment’s name gat. I loved reading every sarcastic paragraph and vowed to visit the battlefield myself one day. That day was today…

We first stopped at the monument at the foot of the hill. The structure forms a cross when viewed from the sky. 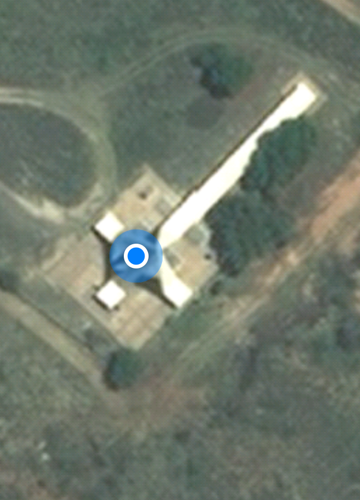 At the battle of Magersfontein (1899), the English troops (on their way to bring relief to their mates in Kimberley) were stopped in their boots by the Boers. What made this battle notable is that the Boer force decided to rather dig trenches at the foot of the hill, and lie and wait for the unsuspecting Souties. The Tommies were expecting the Boers up on the hill and marched themselves to meters from the Boere, ready to attack. The English really planned their encounter gat oor kop and their losses were severe.

The animosity that the troops on the ground felt towards their leadership is captured in this contemporary poem by a soldier of the Black Watch:

We went scouting the rest of the battlefield, but all that we found was a veld mouse gat or two.

We found a bird brigade manning a line of defense, but as soon as we stopped for directions, the garrison stuck their heads in a gat. They must have been scared of the Suzuki fusillade.

We went looking for the battle of Modderrivier, but couldn’t find any monument or plaque. What we saw ‘down the line’ (literally) was the remnants of the once snazzy couches of the Shosholoza train. As a passenger you must have skriked your gat af. This was a train scuffle – no shuffle!

On the other side of the rail was the Modderrivier block house. We sat down on the old wooden floor, each with a beer in hand, looking through the gat into history. For this trip we went riding to fill the gat in our education – what an epic schooling we got.

I hope this was a gat skop newsletter.

*Disclaimer: To anyone that wips his gat because of the abundant use of the word GAT*

It’s not like I landed with my gat in die botter. Your donations help me scribble down our crazy adventures – DANKIE!

You can do an EFT transfer to the account below

The original databases I have compiled over the last 12 years. Most of these contacts were clients at my shop (Tank Girls cc).

Since 2010, most of the contacts I have built up from my blog (www.tankgirls.co.za) as well as from my Facebook page (www.facebook.com/skinnybikerchicken) and my Facebook profile (Skinny van Schalkwyk)

I have been sending this monthly newsletter since 2004 and I've also had people subscribe from it when it was forwarded to them via original subscribers.

I am a journalist to a few local magazines (including BIKE SA and OFFROAD AND ADVENTURE). These magazines periodically publish my newsletters , and include a link to subscribe.

All of the listed subscribers receive this newsletter monthly, and the last one was sent on the 27th of October 2015.

If there are any unsubscriptions from past newsletters, I remove the contact details immediately, as will be evident on my previous distribution list database. These users go on a DO NOT USE list, whereby I ensure they are excluded and will never be spammed. Bounce emails will be contacted personally after the third bounce to ensure that the user is still active and still interested in receiving the newsletter, If not active, they are added to the DO NOT USE list as well.