Skinny sms to Jen: Do you ride dirt?

Jen: I think you have the wrong number…

Skinny: I’m gonna take that as a YES!

Jen: How much Jack are we taking?

Yes! We found her perfectly preserved bottom still lurking around town. Seemingly, her life principle off ‘too much Jack Daniels is never enough’ has started a new religion. AMEN to the Drum Sticks!

What could be more important than spending a weekend with a butt (no pun intended)? So rather than hitting the road to Memel on Brom; I loaded Brom and Vonk on the trailer. Couldn’t get the indicators working on the trailer, but Go-Go-Gadget-Dad quickly made a plan.

My companion for the first part of my trip, Jackson, a hitchhiker I picked up on the farm next door. He wanted a lift into town, but decided to hitch all the way to Majakaneng. He was very camera shy and immediately wanted to know, “Wat maak jy met my snappy???”

The REAL ‘J’… behind her HP – dreaming that it was her HD!

Jen was still hard at work and I had to bribe her away with promises of copious amounts of JD.

And do not believe for one second that we shared…

The road was long, our Jack was limited and traffic was hectic. We took a few wrong turns despite the GPS chicken screaming her lungs out. When we start cackling – nothing distracts us!

NOT the view from behind a visor…

Pssst… Witkop – we need to talk!

Arriving at Memel Hotel, it was dark, cold and bustling…

We shared a few dopsch with the town folk before…

…checking our boneys for the big ride the next morn! Jen was ready to rip through the stof!!!

The next morn we were pleasantly surprised with the room service. Laurika served Jen with a steamin’ cup in bed. They definitely wanted to make sure we got outa bed… Or maybe just checking if we were still alive after the ‘night before’.

The REAL Tank Girl – just in time for a defrosting cuppa and breakie!

The chickens flocked into two groups. Let’s call them the Koekkoeks (…the braver chickens) and the Silkies (the more bedeesd chickens).

All the chickens checking their plumage for the trip… I think the average was set to 2.1 cholesterol.

The Silkies took the straight and narrow to Verkykerskop. As we pulled off, I realized that Jen has never done any dirt in her life…!!! But knowing what a fearless chicken she is I just swung past her yelling, “ONLY USE THE BACK BRAKE!!!!!!” Not sure if a ‘back brake’ is a common part on a Harley – but she managed! 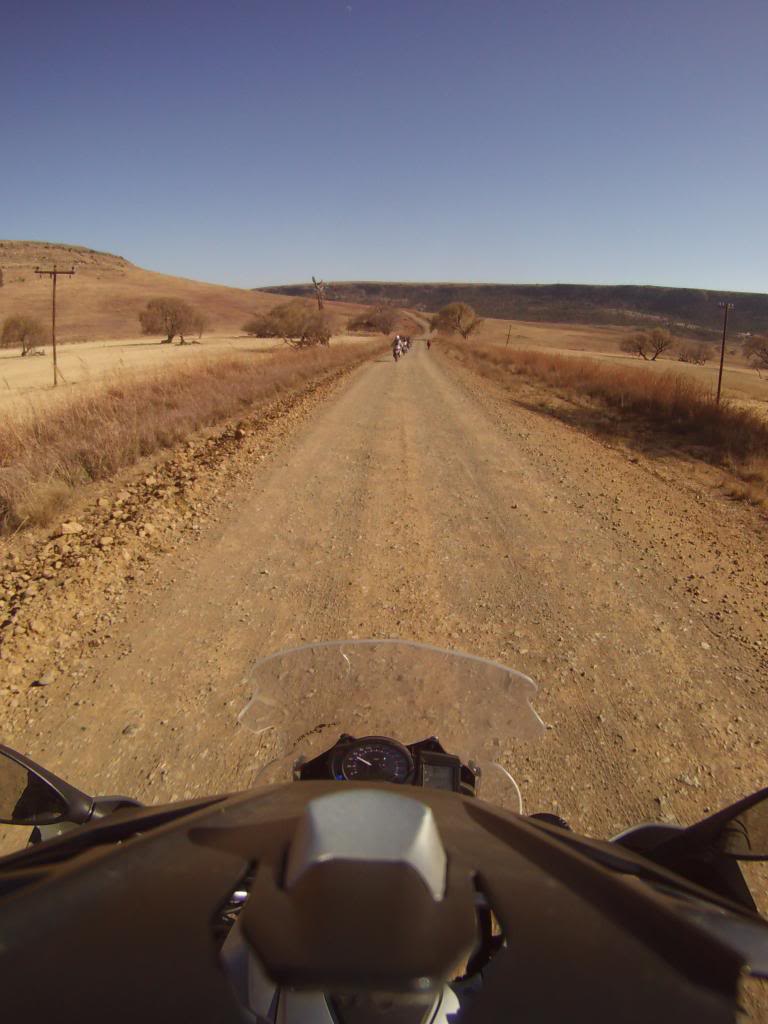 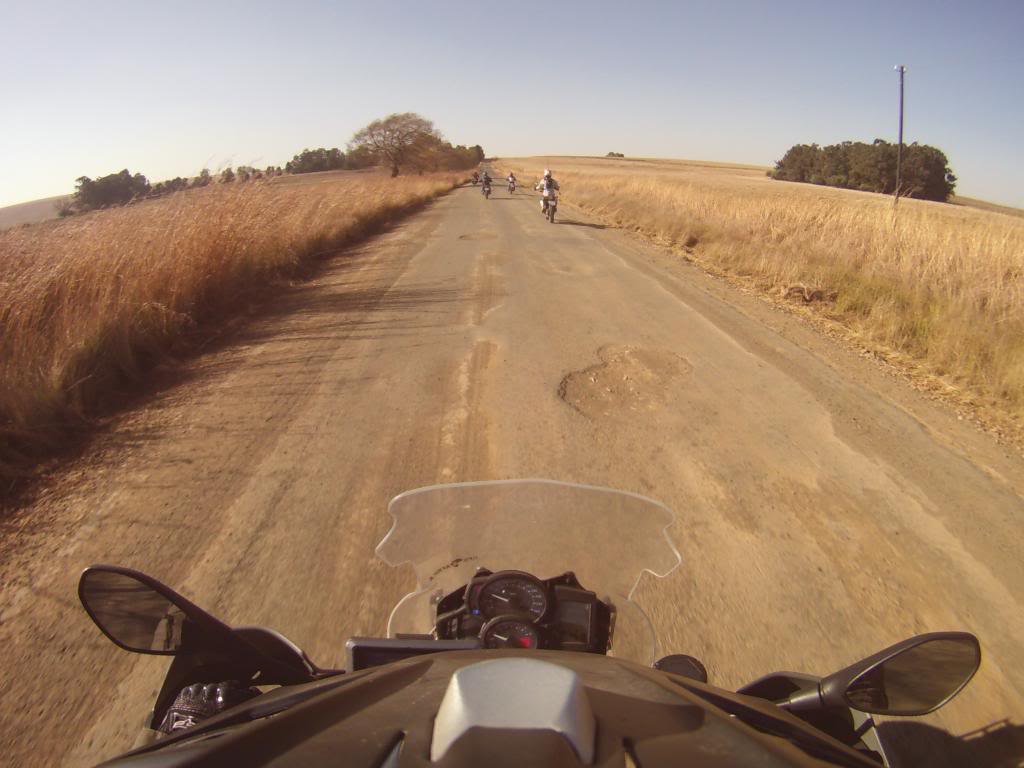 Our sweeper… dusting behind us!

We stopped for a quick ‘smokin’ break.

Excuse me… You don’t possibly know where FarLookersHead is?

Where all the chickens met up for some refreshments and the biggest meal I’ve had in years!

After that wobbly ride – I’ll believe you Jen!

We warmed our walkie-talkies at the fire…

We made ourselves comfy on the stoep…

The DJ loaded us some tjunes on his gramafoon. The first song was ‘Chicky Tikka… tell me what’s wrong…!!!’ by ABBA!

YES – this chicken you handle ‘at your own risk’!!!

Jolandi was showing off her p… her cat!

Yeah… maybe not the lips – but we can’t say much about the alcohol!

…and just to make sure we covered all bases!

We were served a boerekos spread of note! Homemade bread… still steaming outa the oven!

Stelasie – all the chickens in the feeder!

Just before we dragged our plug-full tummies over some more gravel back to the hotel, it was kiekie time. Everybody say: SKROP WERF!

We were certified free range!

We made it back to Memel before the cold set in. We had a braai smokin’ in the back. One by one, the chickens rested their weary combs down at the table…

The long road back the next morning was windy enough to give any chicken some serious air-time.

Wild Dogs/Chickens – thanks for the invite and hopefully we do this next year again. We really liked the fowl-play!!!