And I introduce to you...

About two months ago I got an e-mail from Speed Queen and Storm. They’ve had one too many cups of coffee and came up with this palm-sweating idea. They want to put together an all-girls stunt team!

*Put a lot of business speak in HERE. You can go read all about it on our blog (www.shedare.co.za) OR mail me for a proposal*

But I’ll cut straight to the chase… we want to release 5 YouTube clips for this year. The three chickens jumped right off their hoender stellasies into running around begging people to help us. Begging wasn’t really necessary as everybody seemed eager to help…?!? I guess ‘fun’ is something everybody is aiming for these days.

Storm got our chicken-claws into the door at NAC – da tjopper guys!!!

We met up with them in Midrand to hear if they wanted to be part of our first clip and they decided to take us for a quick ‘tjop’ to Lanseria.

Air-wolf stood outside patiently waiting for his KFC take away.

Alister, our pilot, has this hidden talent to speak to animals… cause at the frequency we were babbling – only dolphins and dogs could understand us.

Speed Queen took up space next to the pilot. Next stunt we’re pulling – YOU’RE DRIVING!

Ground control – come in – come in! I think you forgot the peri-peri sauce?

Except for having a hard time trying to keep the two chickens in the back INSIDE the Huey… Alister probably had his hands full keeping Speed Queen off the controls!

We went through a storm… not the yellow one! An actual storm with druppels and rainbows. We went right underneath it and guess what!?! We didn’t turn into Willem, Gert and Jannie… they lied to us! Now I’m starting to wonder about that pot of gold…???

Lanseria interrogation room… we like being interer… intorer… asked questions.

NAC was sold! And they came up with crazier stunts than what Storm could dream up…!!!

Next we had to arrange our wardrobes. I had to beg Vivante to quickly cut about 10 kilos of leather off my suit. Does this suit make my bum look fast?

We took a day to go scout our film locations. Quick stop at the we-fib-when-we-say-we-are-filling-you-up-when-we-are-actually-sucking-you-dry shop.

Philip ass-essing if the bridge would work…

Having a sneak peak of what’s in Sean’s head. There’s a reason why Speed Queen is giggling…

The day before we started shooting, we went to collect the bikes that Kawasaki gave us to use. I wrapped the headlights in vinyl to match our colors. Here Speed Queen is showing off her headlights… I mean the BIKE’S headlights!

Little bit of advice… Our crown-ly one constantly munches (…as per the kiekie)! Storm and I quickly learned to carry some jelly-tots with us to keep her smiling.

Later on we had a strat meeting, to make sure everybody was on the same film. What could be done, what was almost impossible, and what Jenice could come up with!

We spent most of the morning shooting all the odds and ends at Fourways Motorcycles.

“Okay… CUT! Go back – do that again, but with a little more emotion this time!” 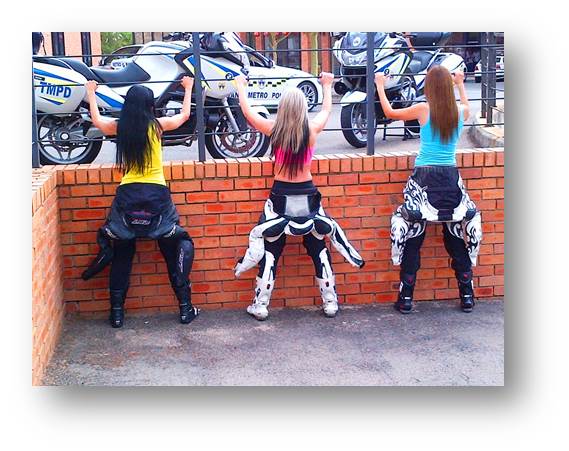 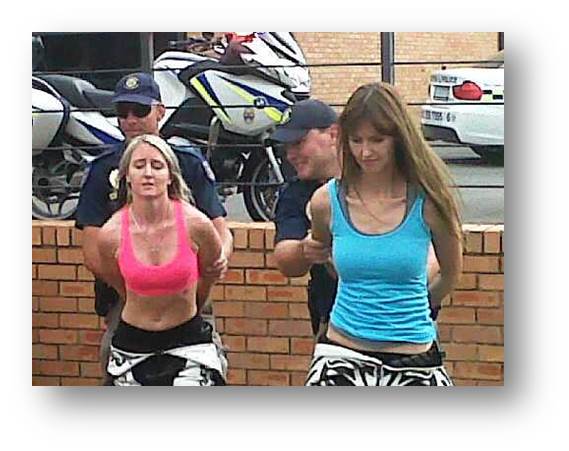 After all the close-ups we could let our hair down.

Actually we had to tie them up for the next scenes…

At one of the intersections on the way to Gerotek, Storm had to check if the tar was standvastig?

We took a lunch break at Gerotek – shooting movies makes you hungry… and you don’t want the Queen hungry!!!

We then went to the heli-pad to welcome NAC. Repelsteeltjie would have a problem…

But we only had two hours with the Huey! Our schedule was toit and so was our Queen… 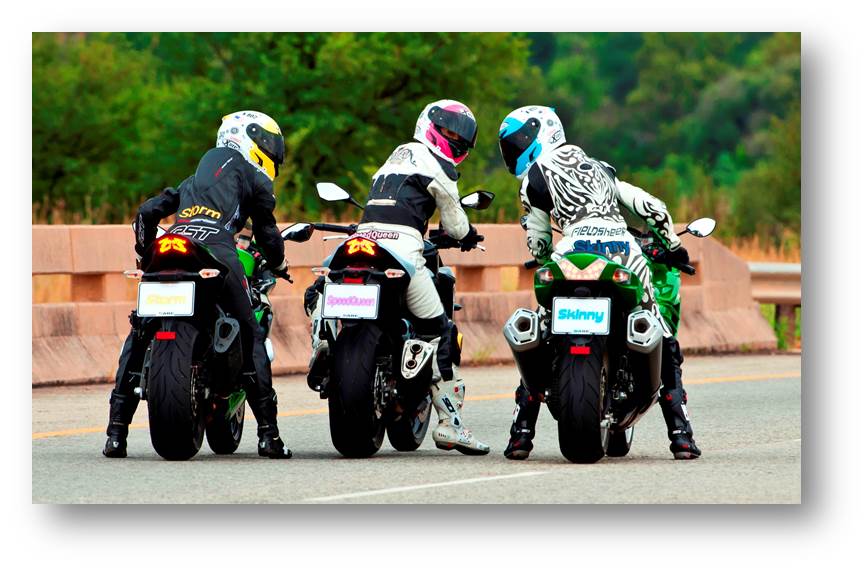 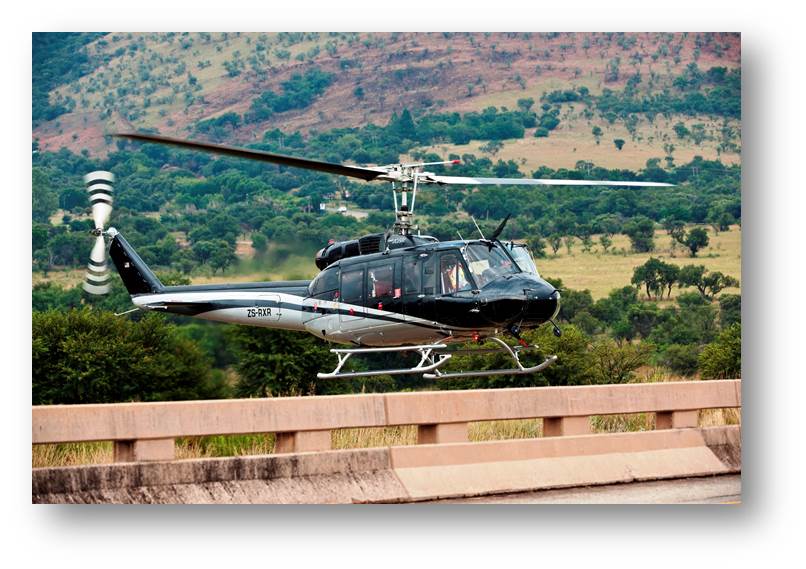 We had to do a third take on the bridge scene and screamed at all the metros to keep the roads closed for one more minute. But an oomie in an old box shape BMW crept through. We started screaming at the oom to get off the bridge, but he kept going slower and slower. In front of him were 20 cops with sirens and guns staring straight at him. He finally came to a dead halt in the middle of the bridge……… and then made a u-turn?!?!? As he was slowly creeping back over the bridge watching us with big eyes in his rear view mirrors… up popped a tjopper from underneath the bridge right next to him. I don’t think the auntie is ever gonna get his undies clean again…!!!

NAC tjopped between bridges, trees and power lines as if they were playing Pac-man.

They were bliksems close to our heads…

…and this still with the fez on our tails!

Sir… can I see your liksens!!!

Klaar with the road scenes, we still had to do some close-up riding. CLOSER! CLOSER!!! 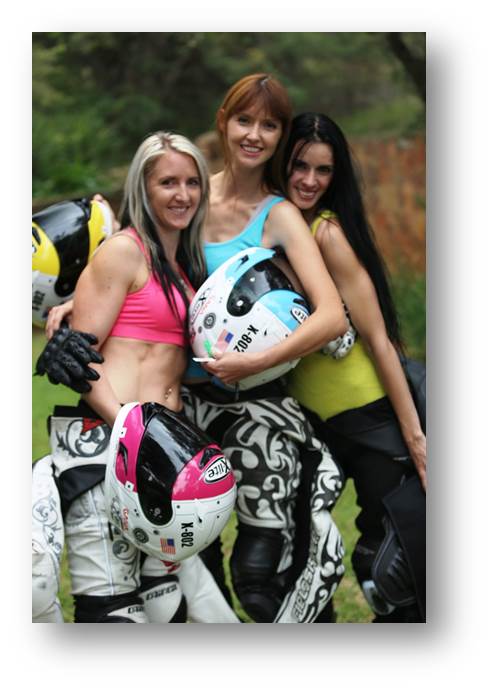 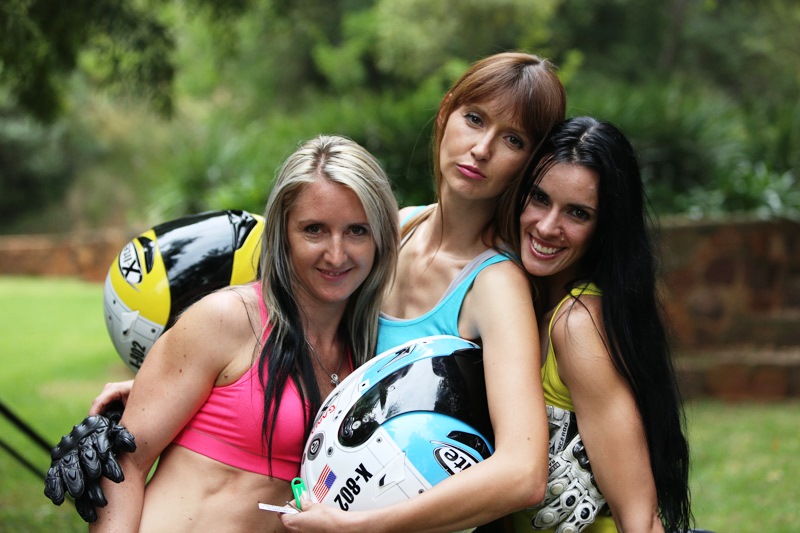 I was amazed at how easy the brul-parra was to handle. I could probably manage a u-turn in my hallway (...not that I have one, but I could probably try it in the kitchen. In any case, I don't use that space for much else)! BTW – it’s a 14… 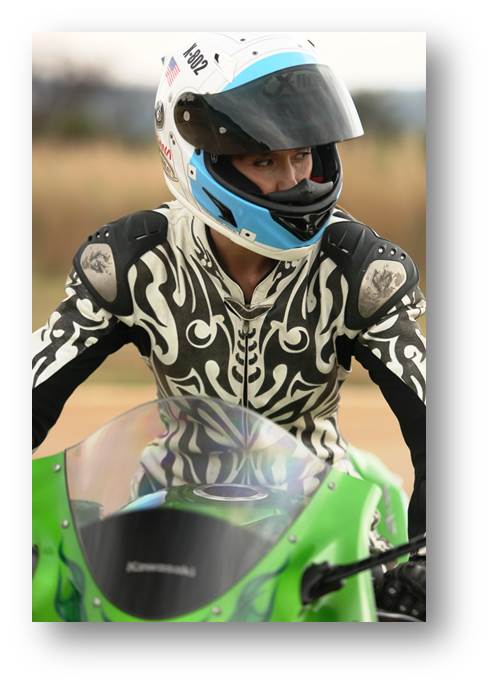 Look what an awesome set they built for us… yeah right! Riaan again gave his floor to the three chickens.

Speed Queen demanded balloons. How she managed to wip these up at 8 o’clock… helium and all, only she will know!?!

No Storm - WAIT!!! Let’s put some weights around your ankles first…

And out of the blue… NOT ME… out of nowhere – the paparazzi started pitching up!

Elmari from Sarie and Speed Queen!

The only way you can make Storm sit still… Take her suit and fill it with bubble wrap. What’s even more fun is jumping on it after the show… Hehehe!!!

Uuuuhhummm! When we finally got everybody’s attention, Speed Queen introduced the team and what the aim with this new venture is.

And it was time for the great debut… the scream of three Kwaks filled the venue and for 4 minutes we had all attention on the Panasonic’s.

After the video it was time to mingle, eat some of our own cupcakes and pose for more kiekies. 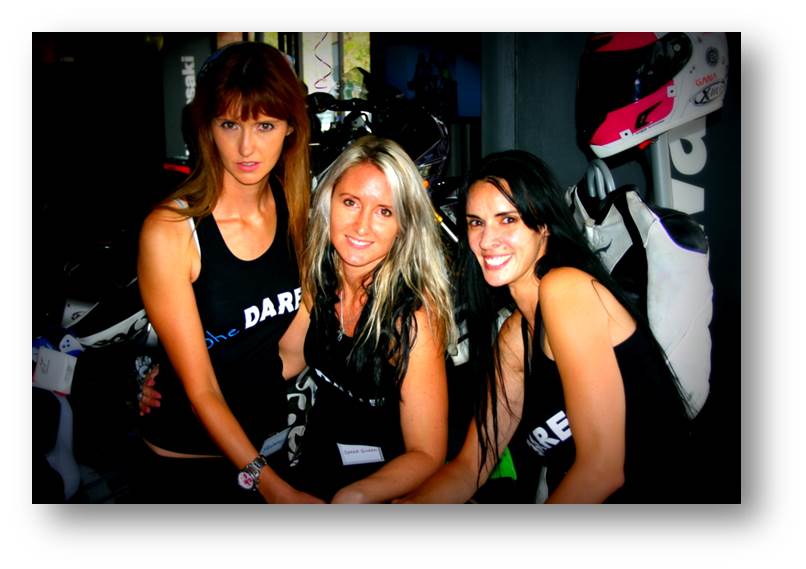 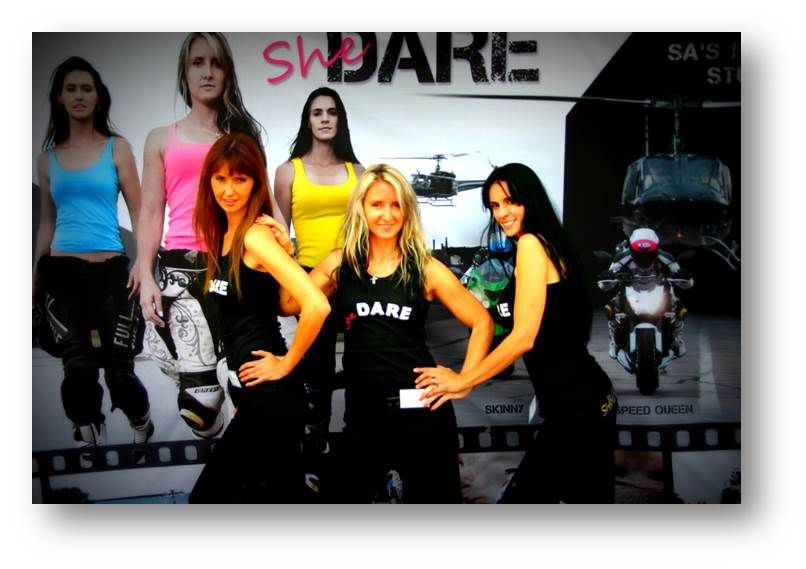 The Storm doing what she doth best – SMILING:

On display we had the first stunt bike. This bike is currently in the workshop being ‘caged’. We still need sponsors for the other two bikes…

But we’re sorry… we can’t hang around any longer! We have the next YouTube clip to plan – we’re outa here!!!