We got all excited when that mal-kop Nederlandse biker chicken, Nienke, said we should give her website a traai:

Basically she has set up a few deals with some of the lodges, B&B’s, etc. around SA to either give you 2 nights stay for free – IF YOU EAT 2 BREAKIES & 2 DINNERS at their restaurant...

We found a lodge be-after Brits called Klipplaatz & sommer booked there for two nights in their tented camp.

We still had a full Friday of slavery before we could hop on the bikes & finally head out to da BUSH. It was getting quite late... and dark by the time we hit the sand road. Which was maybe a good thing... The sand was moerse thick & we wobbled the 14kays to the lodge. It looked like a disco behind me with Griet shaking his main in the moonlight.

We immediately had to wet our binnegoed & dived into the top-box. We found all our stuffs covered in a thin layer of white powder, suspiciously looking like Nigerian koekmeel. Luckily it was only our bag of suger that gave in under the immense wobbly road pressures.

It was chilly (...not the tobasco) & we were wondering about sleeping in the tent with only one duwet over the bed. Turned out to be more than you’ll ever need in the bushveld ‘winter’...

The next day we headed north to the land of milk & mielies – Thabazimbi. We found the most amazing dirt roads & rode past kudu, rooibok & nyalas.

At Assen we had to pull in for juice – Vonk only has something like a 10 litre pens. We had to cross a few kays of national road covered with patches of tar... Not even the trucks managed to drive on those stretches & were rather digging chanels next to it.

There were immense ploeging & this time – I WAS NOT INVOLVED! Haven’t seen so many centre pivots in my life. Hier boer hulle, al om hulle eie gat! Here you see the Waterberge in the back ground.

We got pulled over by a street cafe & decided to join the gogos having drinks.

The warning was clear & thus everybody made themselves comfy under the trees – no walking for us then!

Jimis’ boots were showing as much wear as the gogos’ tooth... only one!

We found this memorial standing in the field, showing the flood line of 2000. Jimis tried to re-enact the event.

Skinny saying her ‘thank yous’ for dirt road – would you ever?!?!?

Under the only big tree over the pad, we found two boers sitting in the shade on the back of a Toyota; small braaier the size of a Yellow pages; two steaks the size of a Bramaan hind quarter. Braaing, just there in the middle of the middle of nowhere. Now that’s why we live in Africa!!!

Back at the ranch...

We watched an African sunset. Luckily it hasn’t been e-tolled yet. In the background we listened to fish eagles & jakkalas prepping for the night. 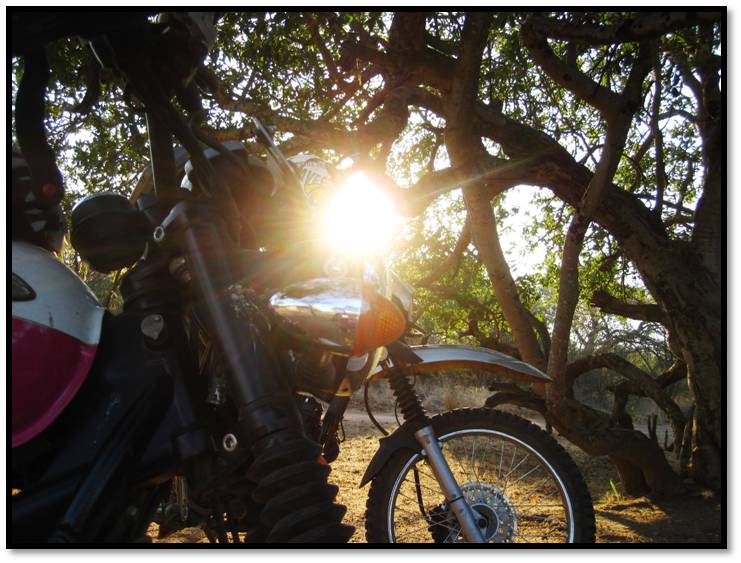 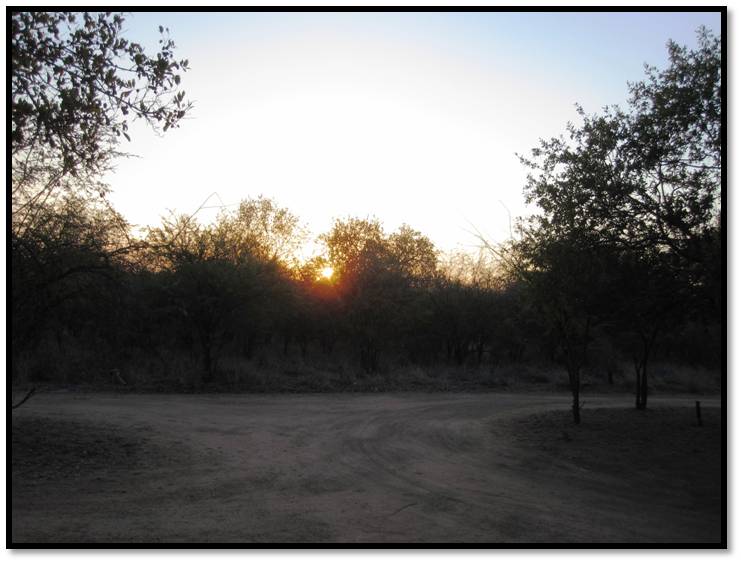 It was drowned with a glass of freshly corked wine.

Some of us made our harre gatte comfy on a stoep chair after a days hard riding.

We fell asleep that night to the roar of the koning of the bush giving his speech to the world. He was obviously not too worried about his own spear...

The next morn, we headed back home & stopped for a breakie at The Cock-&-Bull in Harties.

Some awesome bikes pulled in there!