I was hyper excited for this race. For some reason I really wanted to take on the stof. First off was the quads so we had a late morning, only needed to be on the grid latest 11:45.

When we got to Losberg it was quite chilly. None of the other team members where there yet & we waddled around trying to see if we can enter early. In the process I lost our MSA licenses & we almost had to head home... clean faced.

LOOK – here I still had all my finger nails. My mom always said ‘ek was met die helm gebore’! Read on to find out more...

The dust was already thick from the quads jaaging up a devil.

Mad-Max made a guest appearance...

Luckily our licenses were handed in at the entry van & all was still going 4-stroke.

We kept a spot for the other okes & okettes: 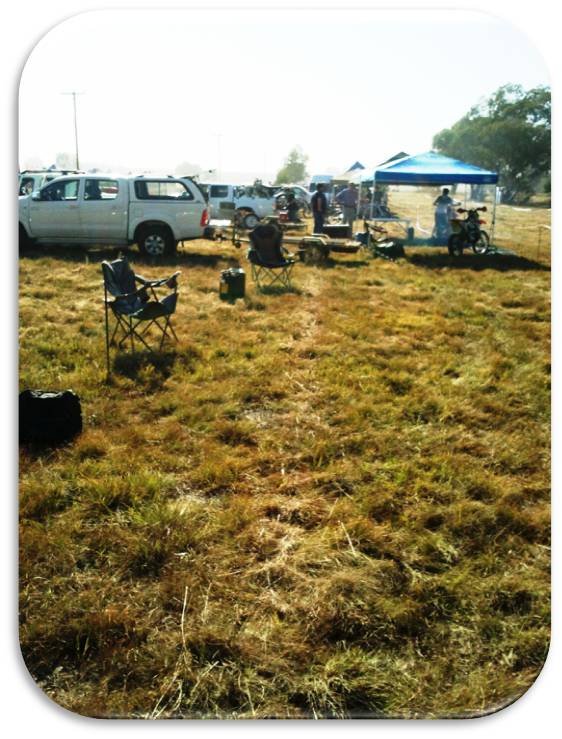 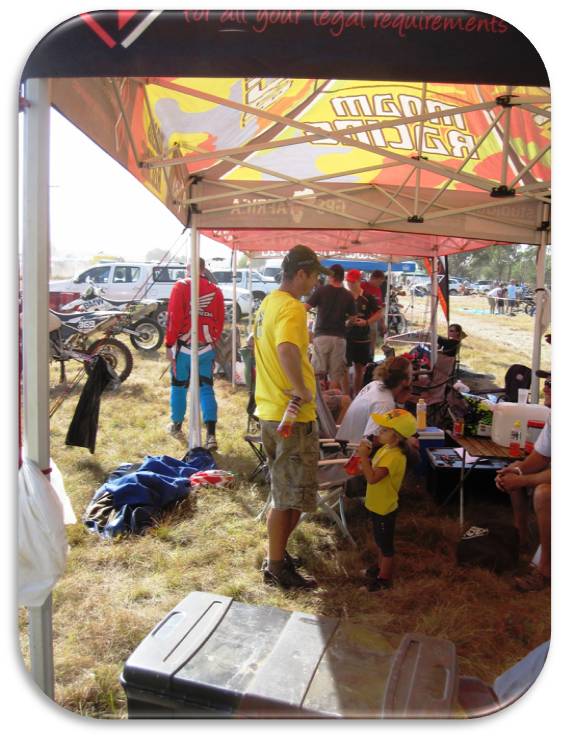 Chaos rained as soon as the other team members pitched. Anke (...that entered her first stof-streep race) forgot her fuel cap at home! Well... it would make refueling in-transit a lot easier. But she opted to rather rush home & go fetch the cap, just to be back in time.

We have to take an emergency board (...pillow case) with us, marked with a red cross on one side & a green OK on the other. For some silly reason I decided not to take my top box with & had to squeeze my board in/on somewhere. Eazy-peazy: three holes in the pillow case & wuntyme mobile board. Here I am testing my OK-ness...

And when you get lift off, just put your arms out like this & flap furiously!

In Mooinooi we run something a little stronger than 95 octane... 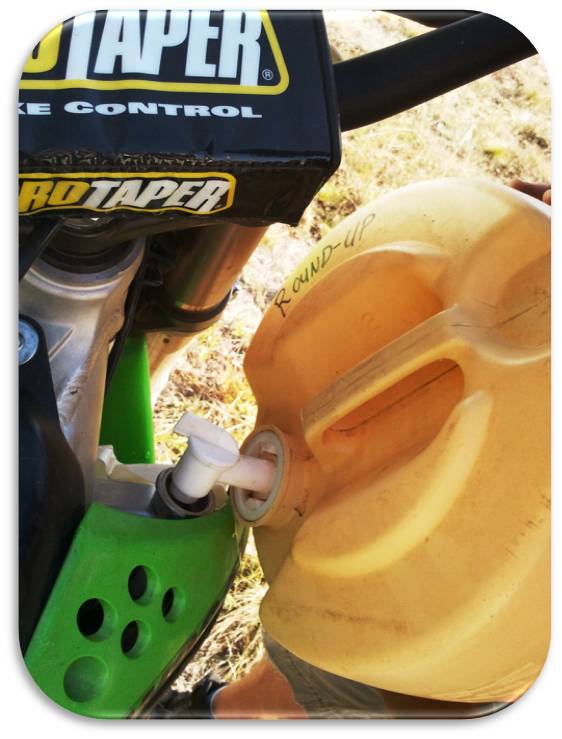 Jimis, Koos, Anke & myself decided to start right from the behind. The late entries behind us just looked too woes & ready for a rollin’! 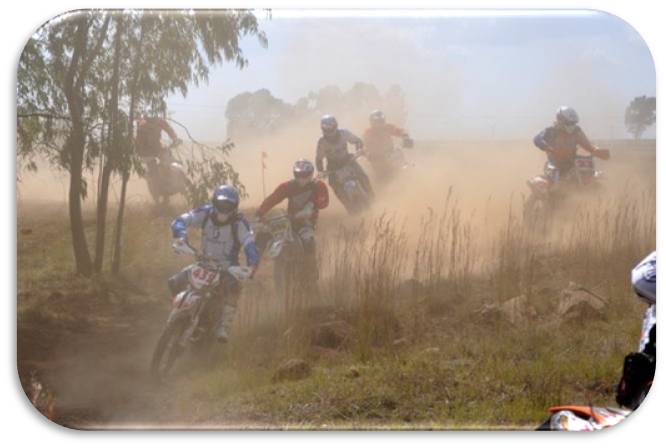 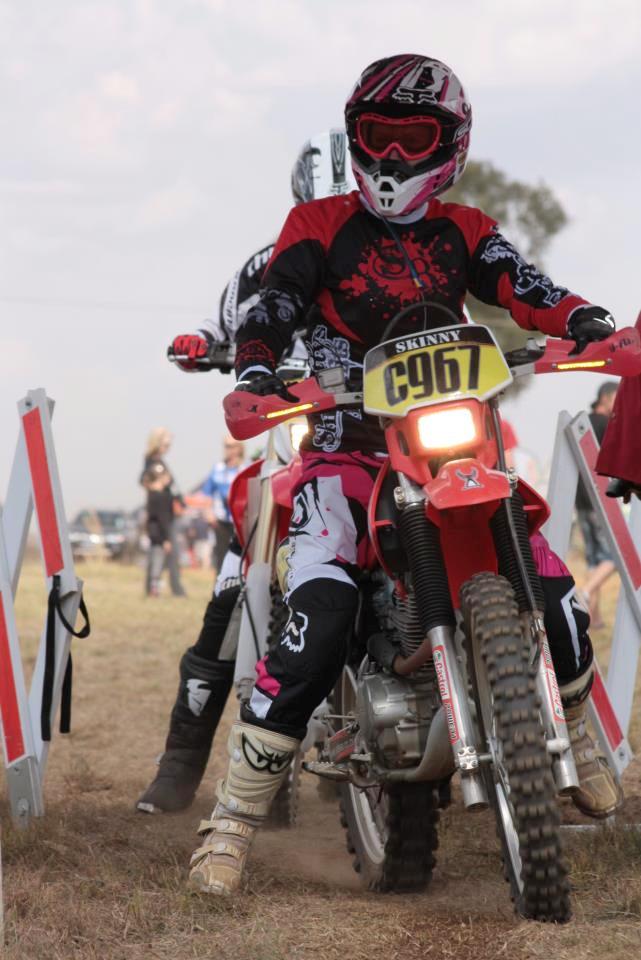 Anke bit into her knobblies & held on to the last group while I strolled in for the agter-osse.

I started like an ostritch – flapping wildly, but not really getting anywhere.

Somewhere after the first mud fight (...I won by the way), I could just-just see Anke’s head popping over the mielies in the distance & a fierce competitiveness in me awoke. Stand-up, hold-on, flat-taps!!! And slowly I reeled her in till I was riding just off-stof side from her. Her bike had way more grunt on the straights, but she held back on the twisties, trees & rocks. I saw my gap & gave my full 230cc’s. It was only a light trot, but I still made it past.

Somewhere I took a wrong turn & found myself on the wrong side of the fence. How true the saying ‘die gras is altyd groener aan die anner kant van die draad’... Had to turn back & re-ride a few kays. Anke was in front again, but I took a deep breath & chased her down nog een keer.

We started climbing this LOSberg. The klippe got bigger, bigger, losser & losser. But stopping means you donner over & thus there was only one way – pumpa da gas, pumpa da gas!

But the geel-oog in me was drawn to the klippies & soon I found myself lodged in a bush. I jumped up & in such a hurry to not loose time, I didn’t check if the bike was in gear. FATAL MISTAKE! As the bike was halfway up, Skakunk started rolling back down the berg. The bike dropped & I found my finger between a rock & a hard Honda... AAARRGGHHHHHH!!!!!!!!!!!!!!! *add very high pitch for effect here*

I plukked my hand out & the glove stayed behind. I knew it was eina but didn’t look. I stopped the next oomie & asked him to help me lift the bike, & in between took a glimps of the finger... AAARRGGHHHHHH!!!!!!!!!!!!!!! *add an even higher pitch for more effect here*

While I’m jumping, screaming, crying, vloeking... Jimis pulls in behind us?!? He also got lost & had to do the first 8kays again. He got off his bike & took his helmet off, turned to me & said... ‘Shurrup or I put a sock in it!’

Oomie (...still holding on to my bike) dropped a jaw & decided to rather get out of there before these rof riders started showing some real sympathy. He was gone before my second tear dropped in da stof.

Jimis took his first AID kit & Detol-led me, bandaged what he could & gave me 2 pain pills.

After liters & liters of tears he convinced me that waiting for the pick-up van was like waiting for Hayley’s Comet (it would eventually come – just not right now). He popped me one more pain pill, cut my glove open & off we went.

Trying to do the remaining 20kays without changing gears... Eina, ouch, p...

He rode behind me all the way back, but at the finish he looked paler than me? A-p-a-r-e-n-t-l-y, the danger spots marked with exclamation marks have degrees of danger.

I never knew this?!? Watching me flying through the air over these !!!!!!!!!! had Jimis a bit more grey around the kiewe than normal.

No pain – no gain! We made it back in ‘mostly’ one piece.

Two days later & they finally pinned me down & took the bandage off. The nail is still there – but not for long... 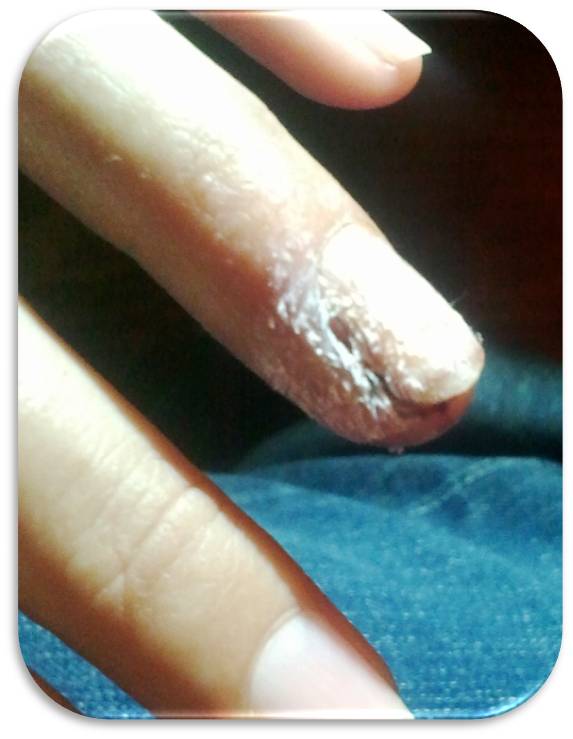 We again had two goue medaljes. Johan & Marcel took first in both their classes.

Check my muis! We picked this little okie up at the pits. He wasn’t lus to say cheese...

At time of press(ing enter) the results were not yet available.

How quickly does a nail grow back?!?!